Clint Malarchuk was born on May 1, 1961 in Grande Prairie, Alberta. At the end of his final year with the Portland Winter Hawks, Malarchuk was drafted 74th overall by the Quebec Nordiques in 1981. He transitioned to the pros in 1981-82 and on December 13, 1981, it happened. Malarchuk got the start in goal against the Buffalo Sabres and he stopped 25 of 29 shots in a 4-4 tie. In 1982-83, he appeared in a further 15 NHL games with the Nordiques and also won the Harry Hap Holmes Award in the AHL with teammate Brian Ford. By 1985-86, he became the starter of the Nordiques and over his final two seasons in Quebec, he played 100 games with 44 wins. He was then traded to Washington in 1987 (along with Dale Hunter), in the deal that eventually ended up with Joe Sakic being drafted by the Nordiques. In his first year in Washington, he led the NHL in shutouts with 4. After 42 games with them in '88-89, he was traded to Buffalo as part of the deal that eventually resulted in the draft of Byron Dafoe and he recorded a shutout in his first game with the Sabres.

16 days after his trade to Buffalo, one of the NHL's most horrific near-death incidents occurred involving Clint. As Steve Tuttle and Uwe Krupp crashed the net in a match between the Sabres and Blues, the skate blade of Tuttle severed Malarchuk's carotid artery and also cut his jugular. He was immediately bleeding uncontrollably and thanks to the quick thinking of the Sabres' trainer who happened to be a combat medic during the Vietnam War, Clint's life was saved. 300 stitches and 11 days later, Malarchuk played his next game. Malarchuk played three more seasons in Buffalo, then one year with San Diego in the IHL where he won the James Norris Memorial Trophy as the goalie with the fewest goals against. He played two full seasons thereafter with Las Vegas before "retiring", though he did appear in one game in 1995-96, and also in 3 games in 1996-97 while also taking up the assistant coaching role. He officially retired from play in 1997 and focused on coaching for several years, even making it into the NHL as a goalie coach with Florida, Columbus, and Calgary. He released a best-selling novel in 2014 which apart from his time in the game, also talked in length about his struggles with mental health after his injury and he is also a motivational speaker today.

What you are looking at right now is a circa 1987 Sher-Wood goalie stick that was used by Malarchuk near the latter part of his time with the Quebec Nordiques. It has lots of great wear and tear, indicative of the battling spirit that Malarchuk always possessed.

Acquired From: Donated to museum by long-time patron. Item came from Quebec and everything about it is correct, from the stick model to the tape job.

Photomatched: No, referenced only at this time. 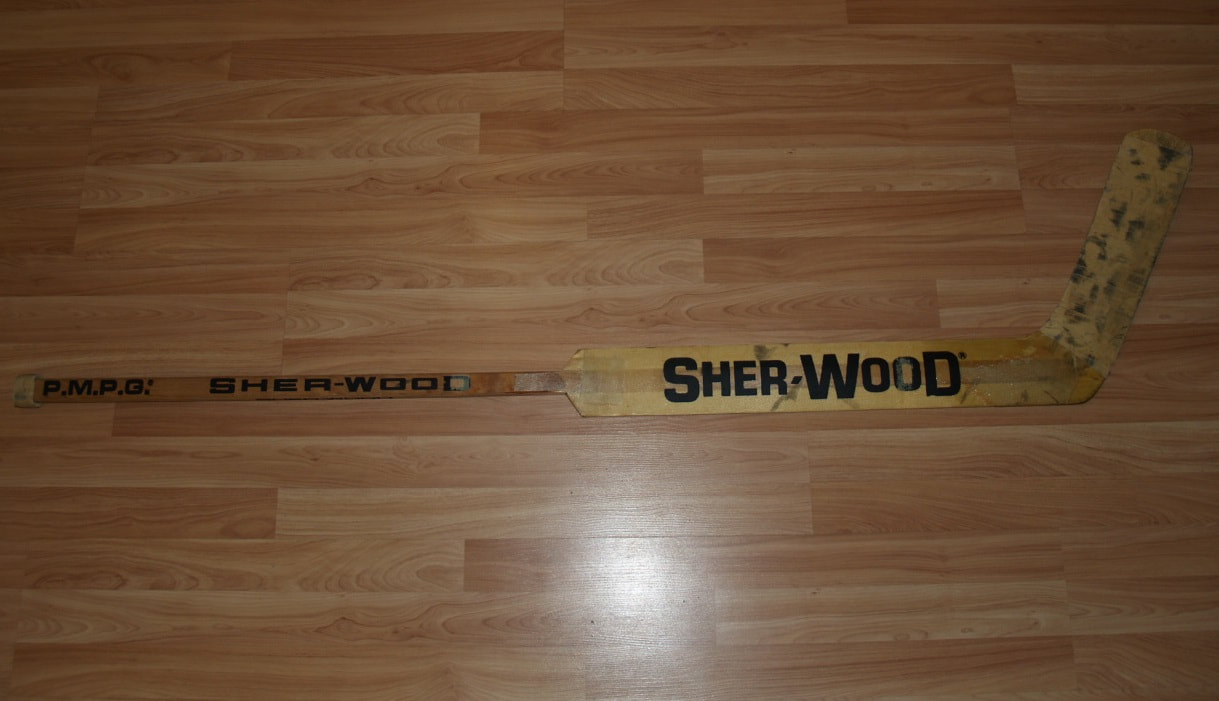 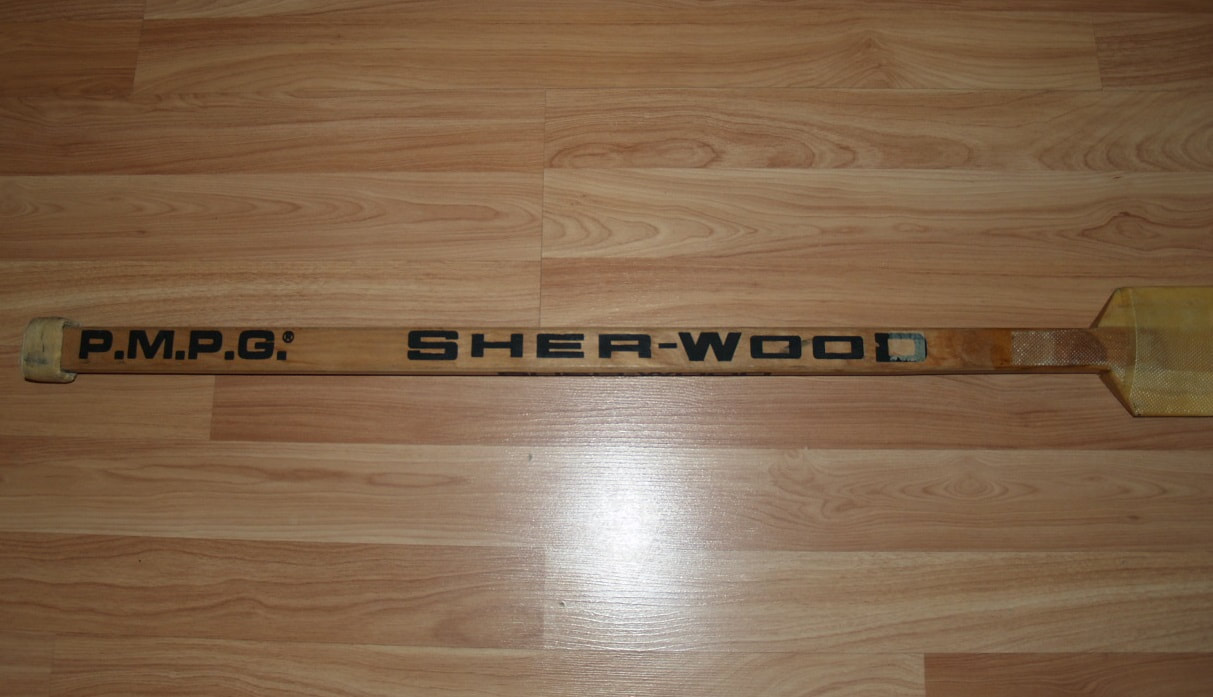 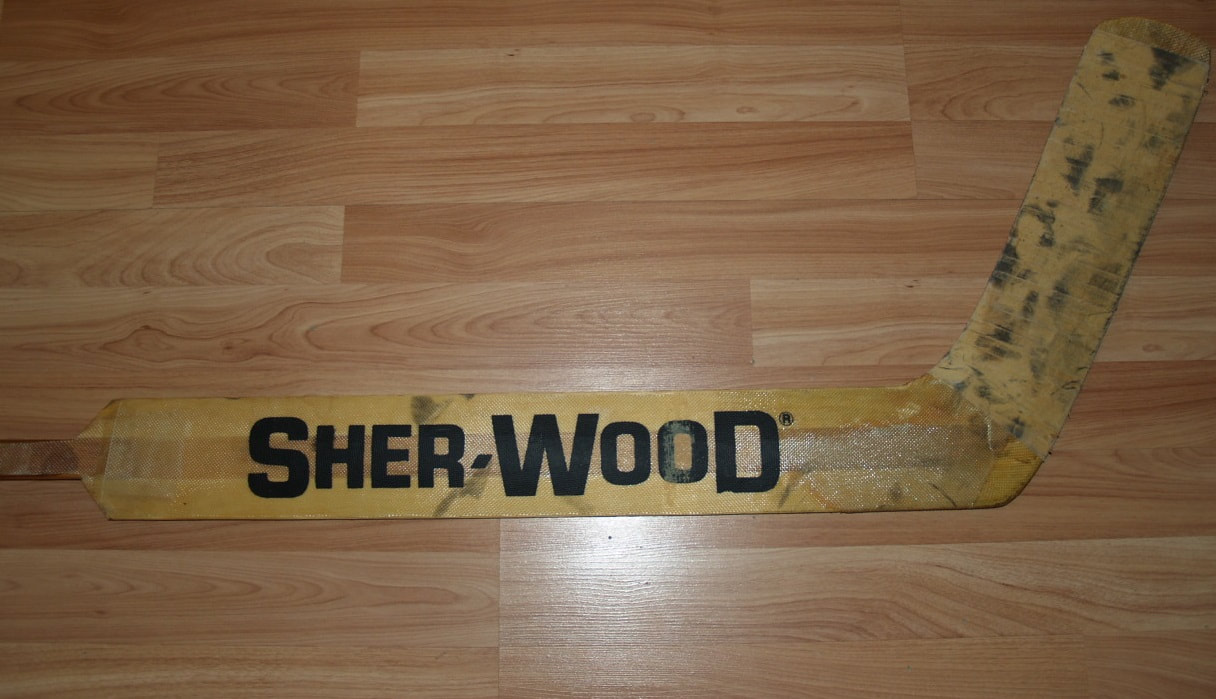 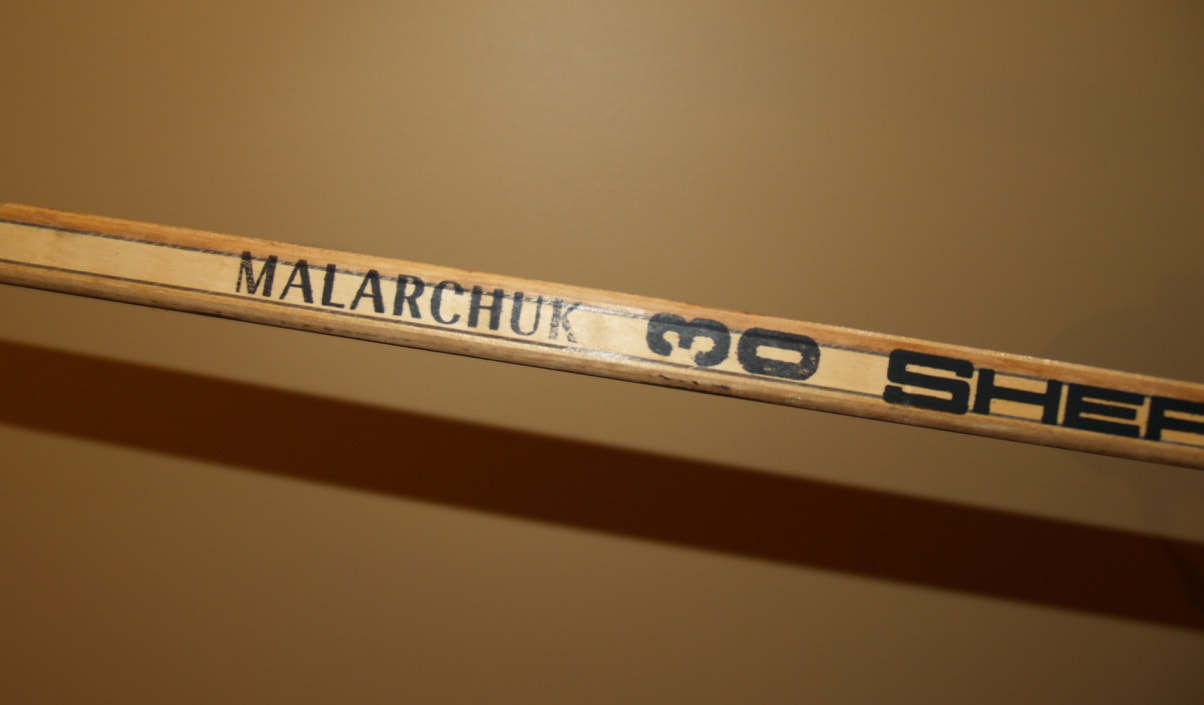 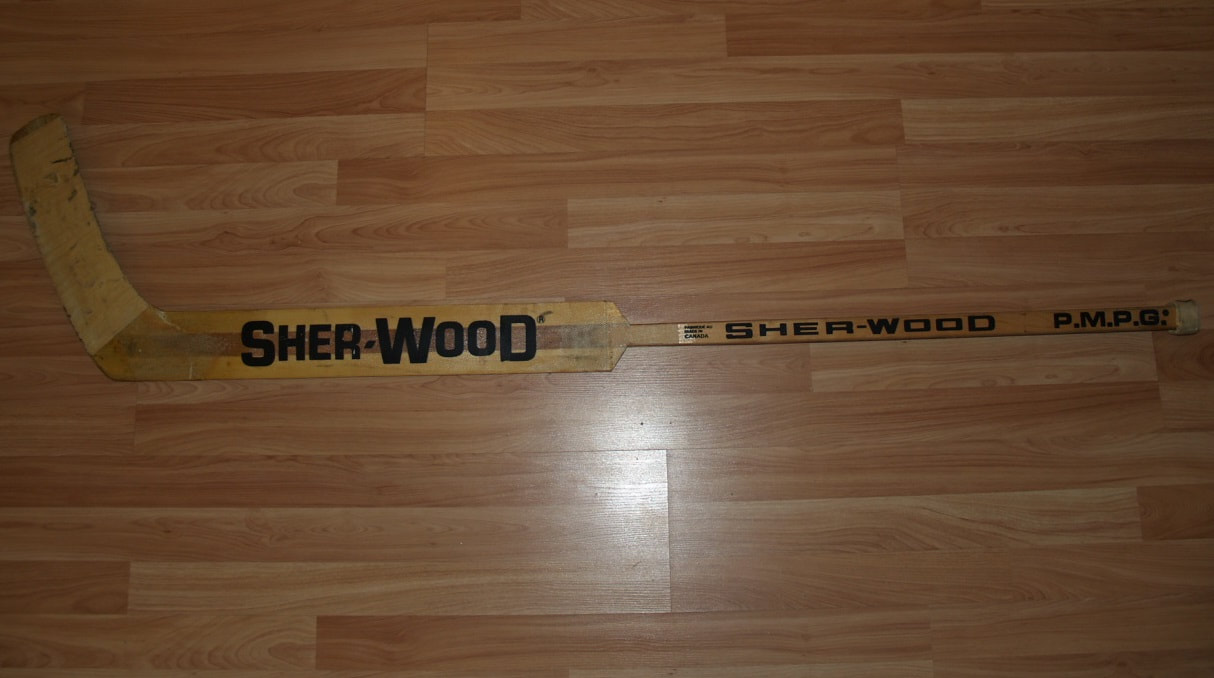 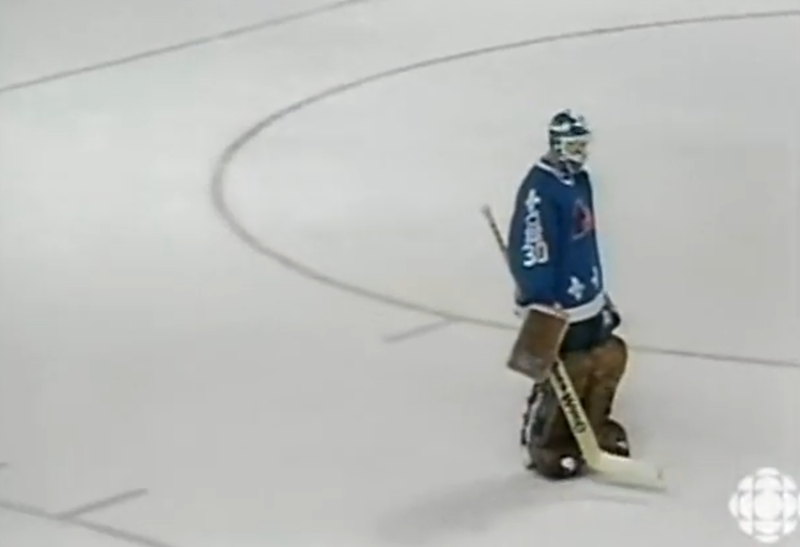 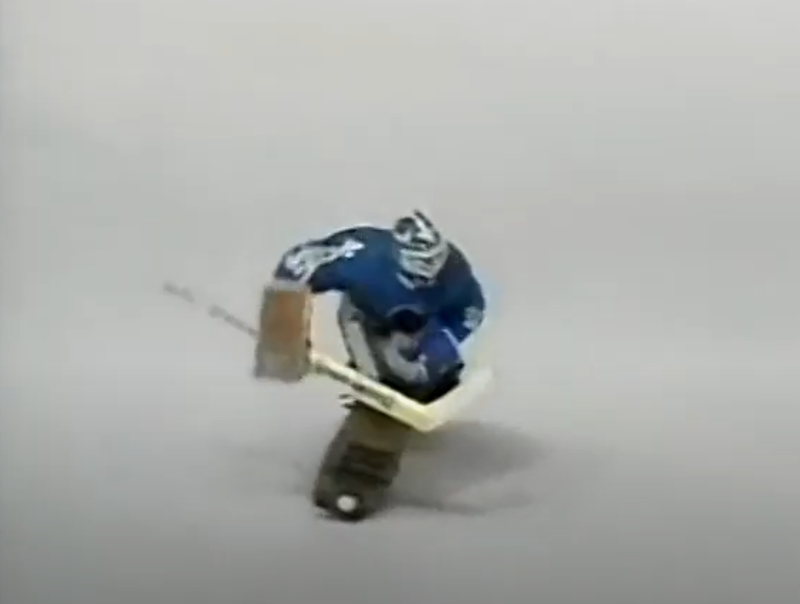 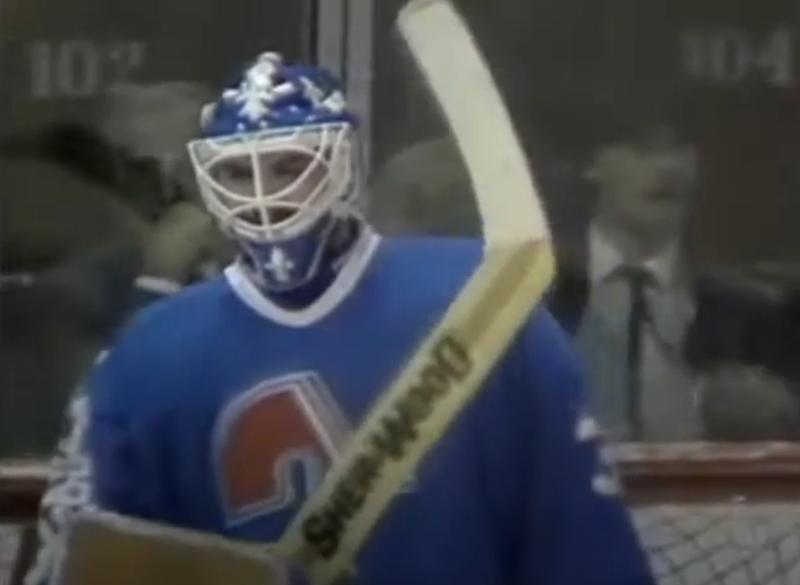