​Born on August 8, 1982, in Kalix, Sweden, Viktor Fasth was a star goalie in Sweden, even leading the national team to a silver medal in the 2011 IIHF Worlds. In 2012, he was signed to a two year deal by the Anaheim Ducks and at the age of 30, he was on his way to play professional hockey in North America.

He started the year in Norfolk and got recalled by the Ducks in January 2013. On January 26, 2013 Fasth made his NHL debut against Nashville, stopping 19 of 21 shots in a 3-2 shootout victory. Fasth continued to make an excellent first impression as he recorded 8 consecutive wins to begin his NHL career. He remained on the Ducks for the rest of that season, appearing in 25 games while earning a 15-6-2 record with a 2.18GAA, 4 shutouts, and a 0.921% save average. The following year, after only five games (and lots of time in the AHL), he was traded to the Edmonton Oilers. He played 7 decent games with Edmonton to conclude that season. In 2014-15, Fasth entered as a legitimate competitor for Ben Scrivens' starting role, however, he struggled early on, recording only 2 wins in his first 12 games of the season. He ended up appearing in 26 games with the Oilers in 2014-15. The next year, Fasth left North America to play in the KHL. He won an IIHF Gold with Sweden in 2016-17, he represented Sweden in the 2018 Winter Olympics, he was an SHL Champ in 2017-18, he was an SHL Champ again in 2020-21, and he also represented Sweden in the 2021 IIHF Worlds. Viktor Fasth officially retired from play on June 10, 2021.

What you are looking at right now is a game worn Edmonton Oilers Road Set 2 jersey donned by Viktor Fasth in 2014-15. Wearing it, he played in 9 games, including his final NHL game, and his final NHL win. The jersey features excellent wear including countless puck marks, stick marks, and an unrepaired laceration on the front.

Acquired From: The Meigray Group with LOA 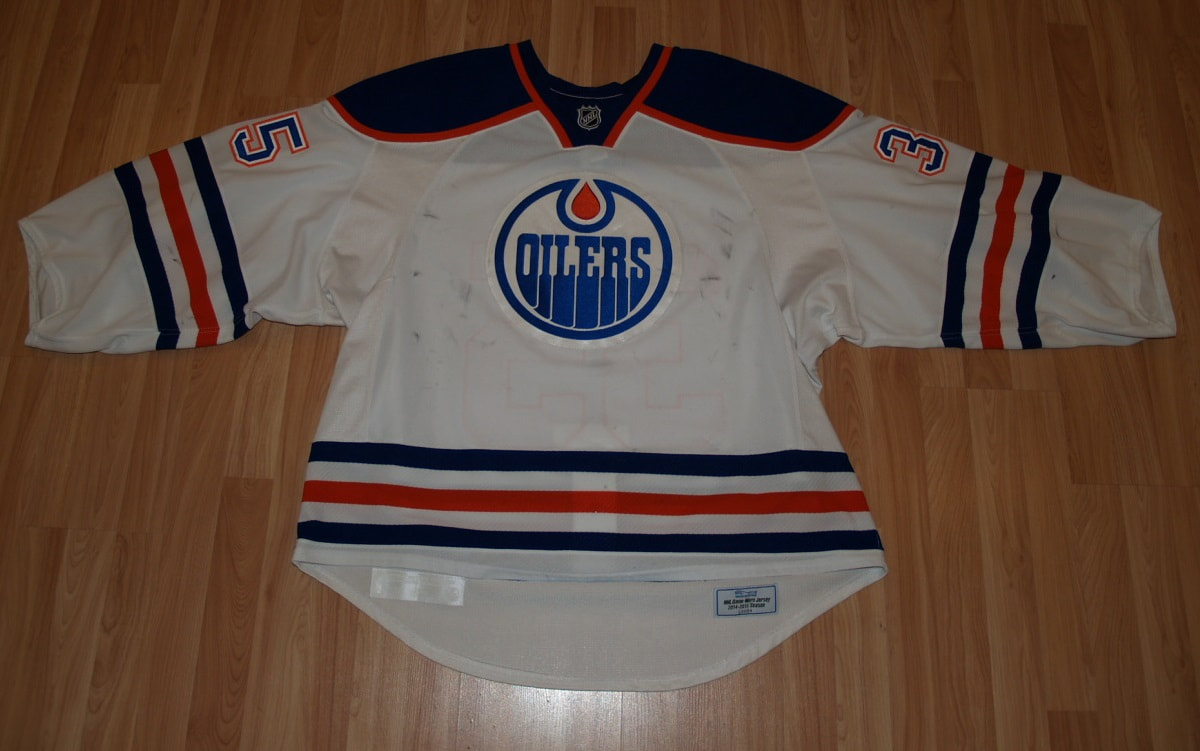 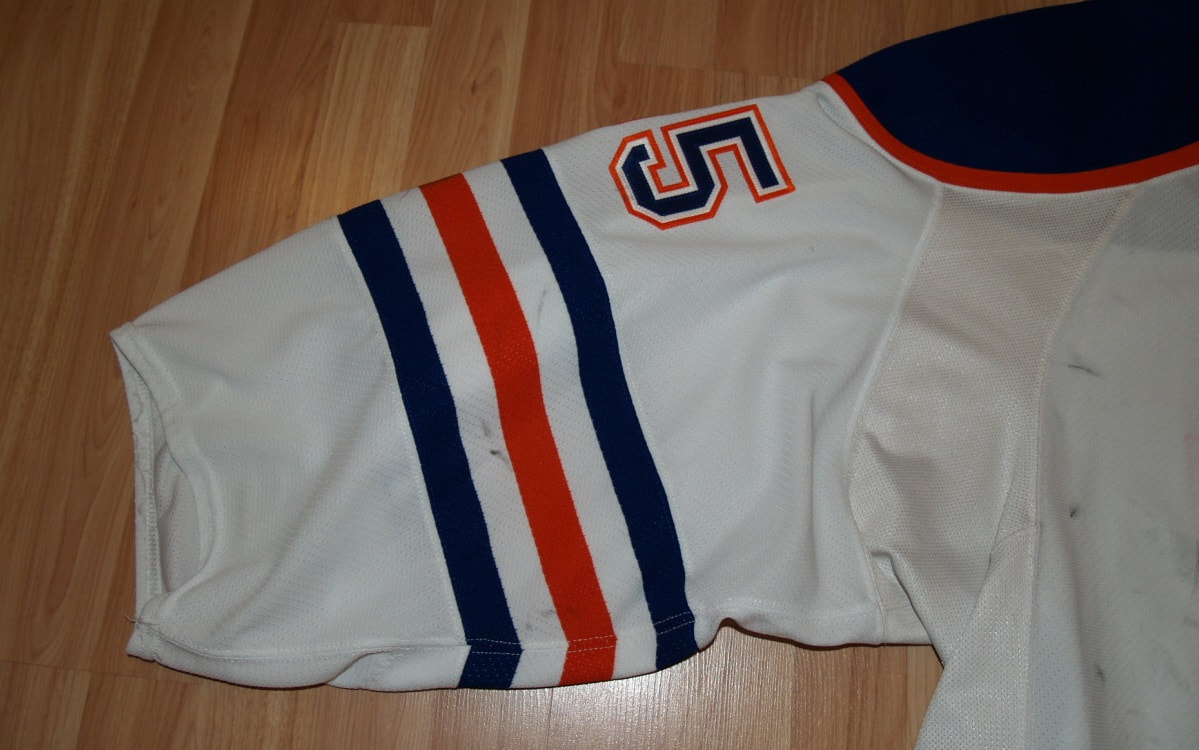 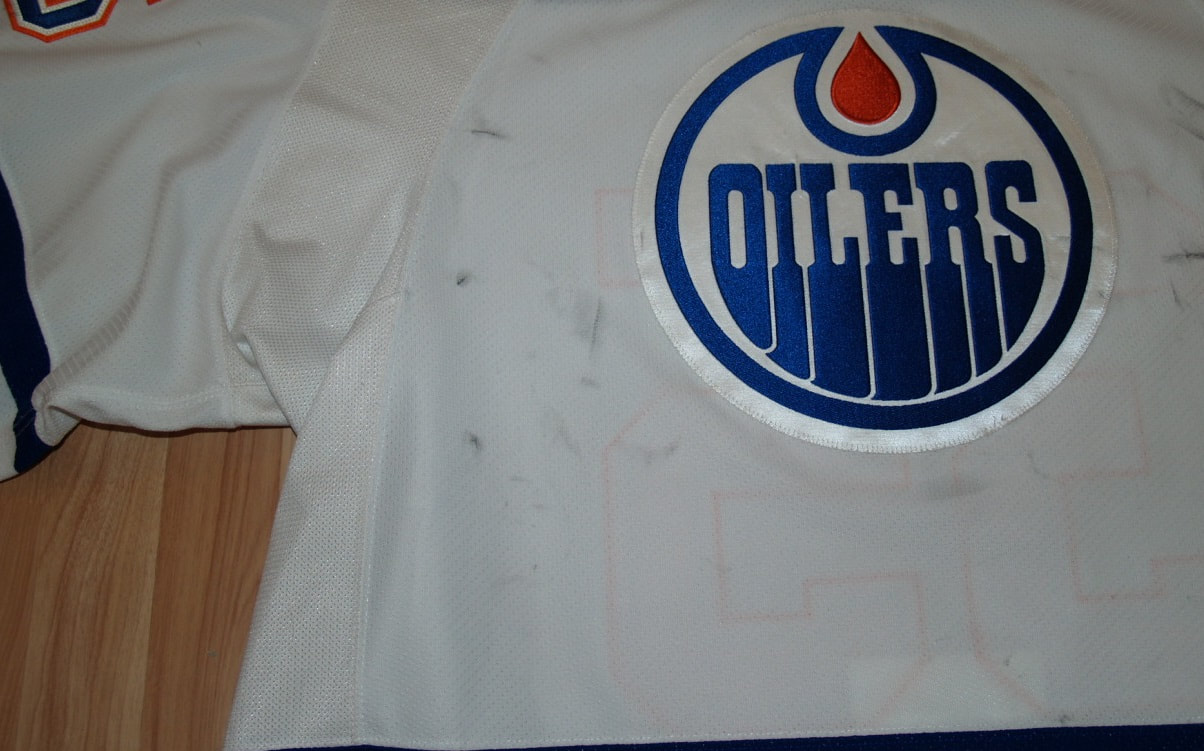 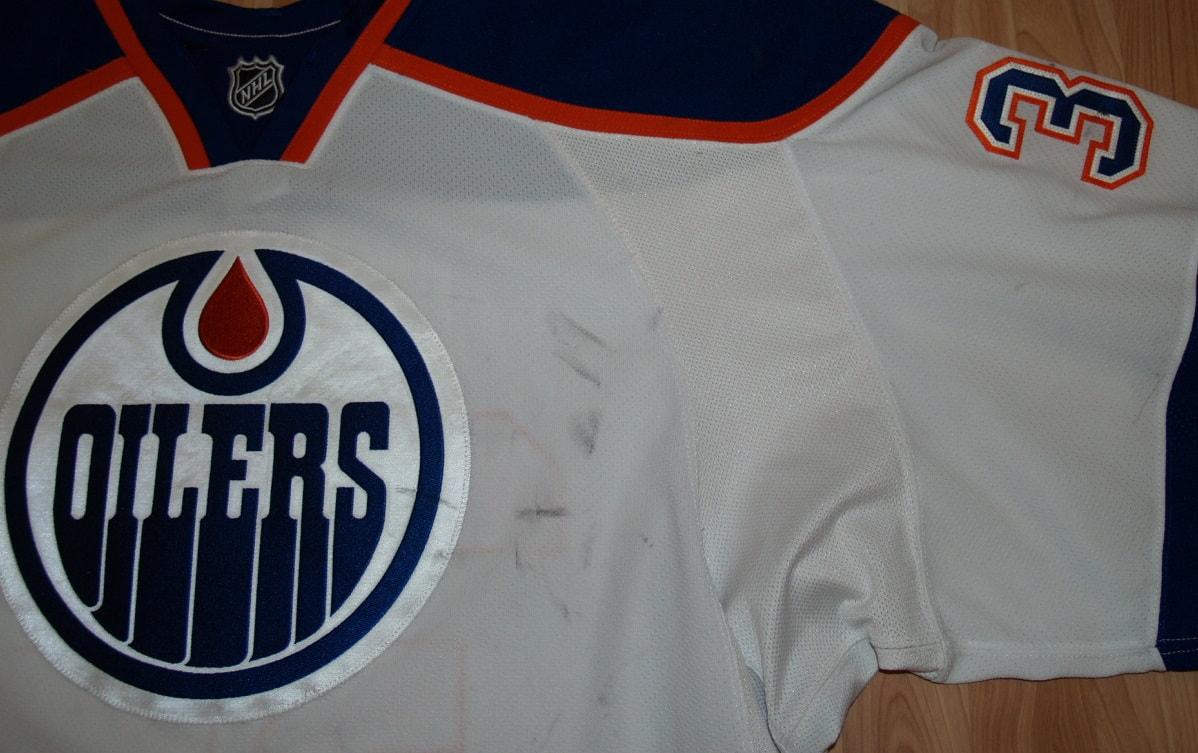 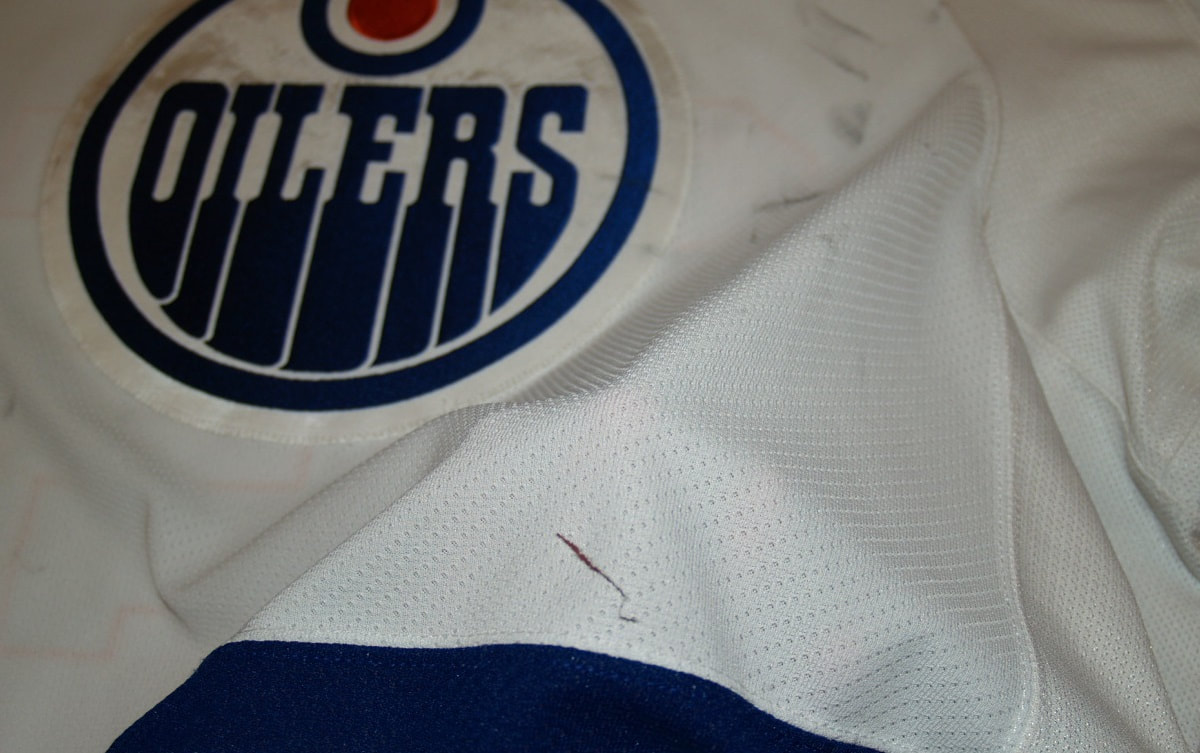 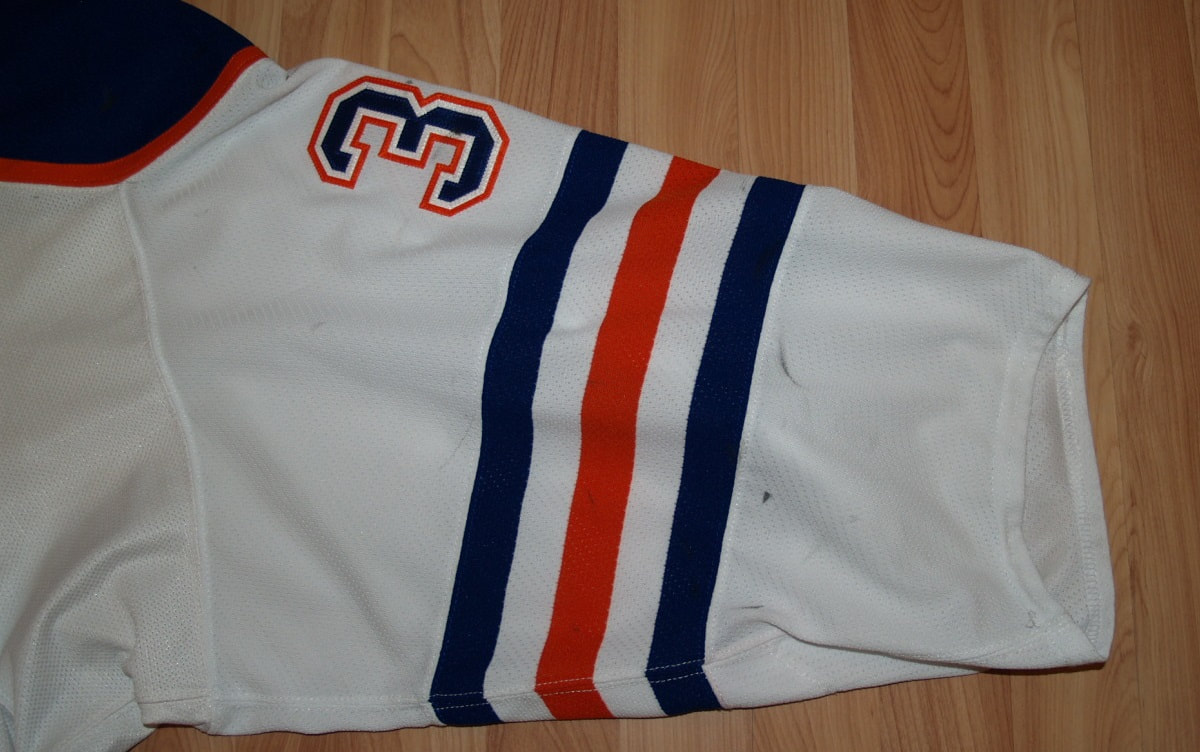 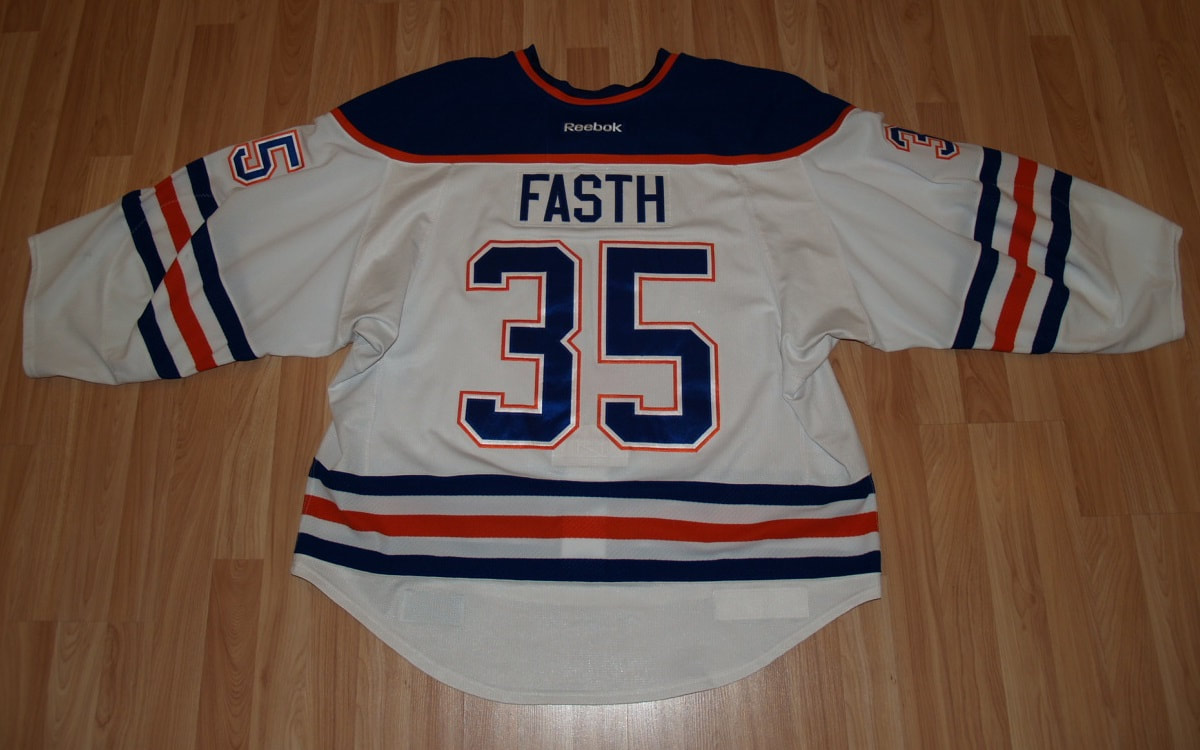 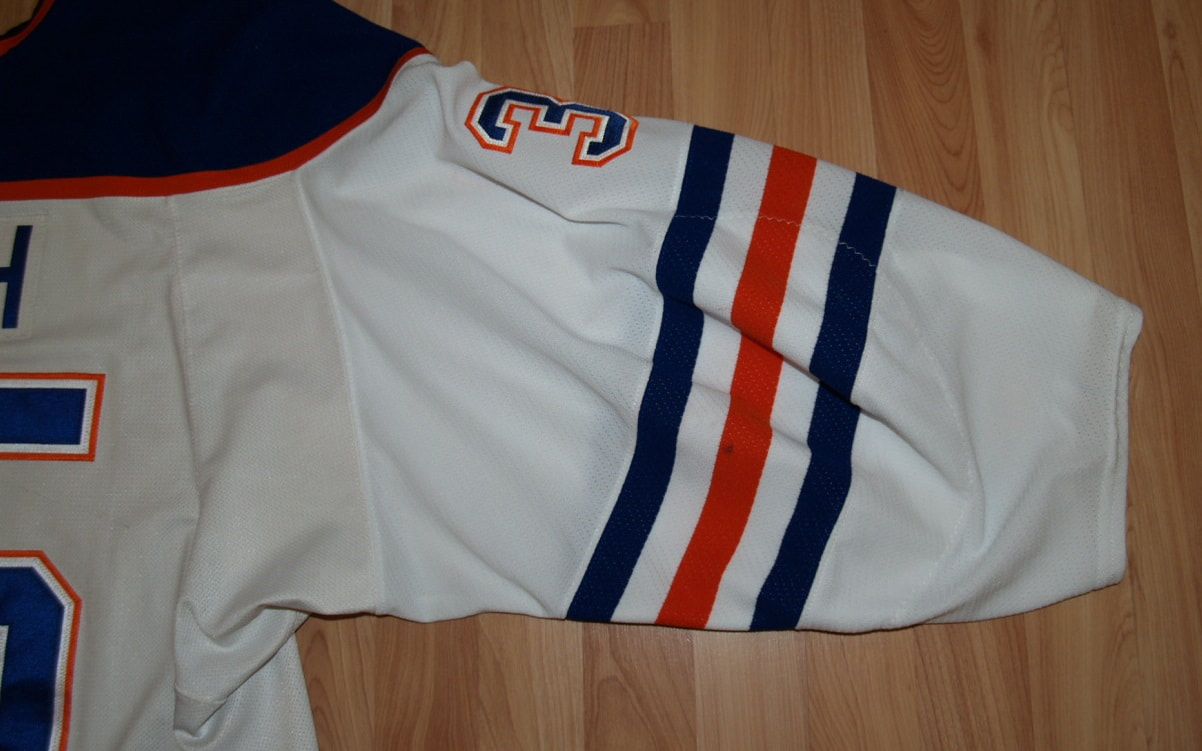