Denis DeJordy was born on November 12, 1938 in St. Hyacinthe, Quebec, Canada. Signed by the Chicago Blackhawks, he was recalled by the team in the 1961 playoffs and dressed as the back-up, getting his name added to the Stanley Cup as a result, even before he actually played in his first NHL game! On November 7, 1962, Denis DeJordy was given his first taste of NHL action. He relieved Glenn Hall between the pipes and played nearly 50 minutes of the game, stopping 24 of 26 shots in Chicago's 3-3 tie against Boston. DeJordy appeared in 5 games for the Blackhawks that year and spent the majority of the season with Buffalo in the AHL, where he was that AHL season's MVP, goalie with the lowest GAA, as well as an All-Star! He appeared in 6 more NHL games the following year before finally getting his big break in 1964-65, when he appeared in 30 games for Chicago as the back-up to Glenn Hall in a season in which they made it to the Stanley Cup Final, ultimately falling to Montreal in 7 games. He spent the whole '65-66 season in the minors and made his return to the NHL the following year and never looked back. He recorded a career high 22 wins in 44 games that year and he was also the Vezina Trophy Winner that year with Glenn Hall. He remained the Blackhawks' starter until 1969-70, when he was ultimately supplanted by another future legend in Tony Esposito. DeJordy was traded to Los Angeles in February of 1970 where he was their starter for two seasons. In 1971-72, after mightily struggling to start the year, the Kings traded DeJordy to Montreal where he played in 7 games. He was then traded to the Islanders at the end of the season, and was then traded onto Detroit before ever playing for the Isles. He spent the final two seasons of his career with the Red Wings (and their AHL/CHL affiliates), appearing in 25 games. His final NHL game was fitting as he faced the team he started it all with. On December 5, 1973, he surrendered 4 goals on 8 shots against Chicago. He officially retired from play at the end of the 1973-74 season. The next season he was hired by the Detroit Red Wings to be a goalie coach, by some accounts, the first ever true goalie coach in NHL history.

What you are looking at right now is a 1960s era Gunzo's G100 goalie catching glove cuffed over a Cooper GM12 catcher, that I believe could be attributed to Denis DeJordy. On the inner cuff of the glove is the G100, GUNZO's, Berwyn, Illinois writing, along with their goalie-man logo. The opposite cuff has the tag which says, 'GUNZO's Berwyn, Illinois'. This particular variant of the Berwyn tag was only used in the time period of 1969 to 1970 according to further research conducted by myself with Mr. David Martel of Global Vintage Sports. According to the reputable dealer from Illinois that I acquired this from, the glove was purchased by him from "the estate a lifelong Chicago Blackhawks season ticket holder [1958-1986] who acquired it from one of the Blackhawks team trainers, whom he had befriended as his seats were near the end of the players bench." Stories like this are not uncommon for the era, as people did not have the same mindset towards equipment as they did today. We have several pieces in our museum with similar stories that we have been able to photomatch so I am not concerned. If someone said Carey Price gave them his glove after a game today, I'd have more questions and concerns. That is a plus point. It comes from Illinois, which is another plus as Gunzo's did a lot of the professional equipment, including jerseys, player gloves, and some goalie equipment for the Blackhawks as they are also based out of Illinois. On top of that, this exact model glove with the red leather can be seen in many photos of DeJordy in action, making for many easy photoreferences. This model of glove could not be seen in action by any of the other goalies of the Hawks' 1960s according to my research. It checks a lot of check-marks on what I would be looking for on a DeJordy glove which made me confident enough to purchase it.

We also sent a letter to Mr. DeJordy and received a reply back with quite certain terms that "he is as sure as he can be that it is his glove".

Acquired from: Antiques dealer, John Cole out of Deerfield, Illinois. My further research makes me confident that this is a Denis DeJordy game worn piece.

Dates of game use: Unknown at this time, however, definitely from the 1960s.

Photomatched: No, referenced many times, though. 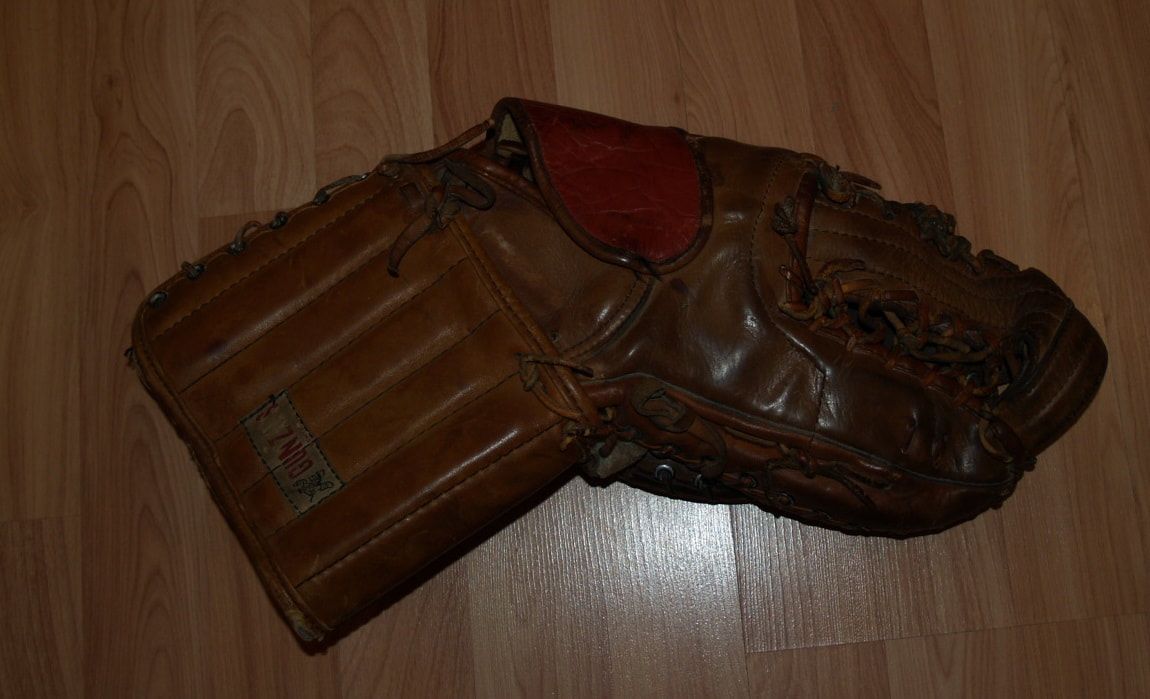 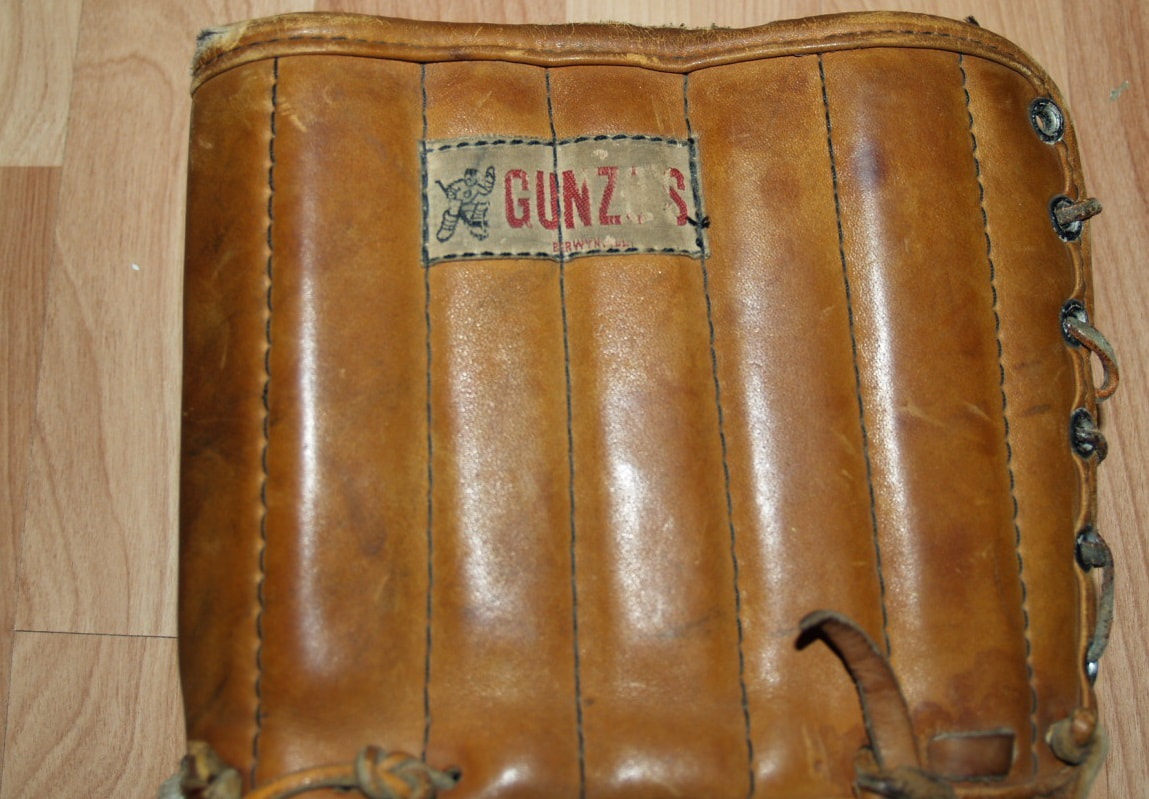 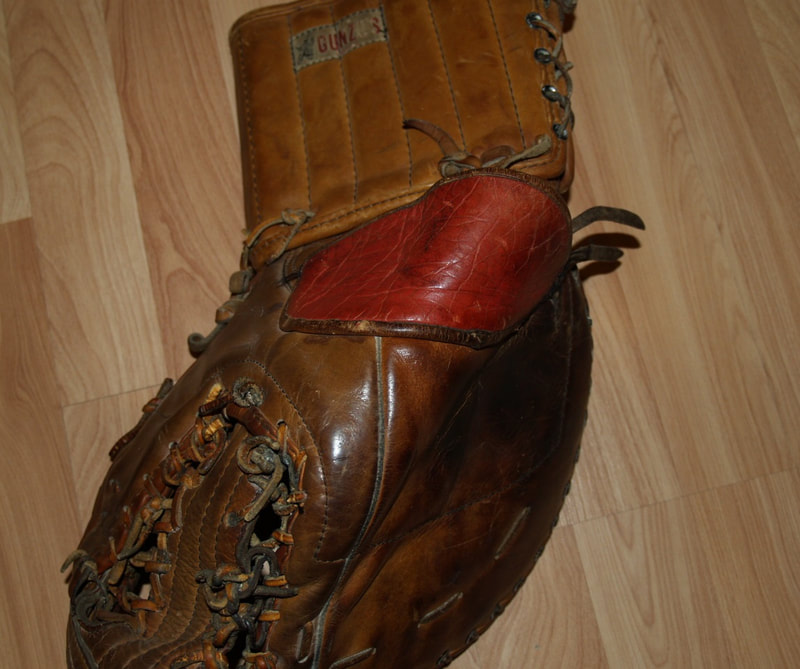 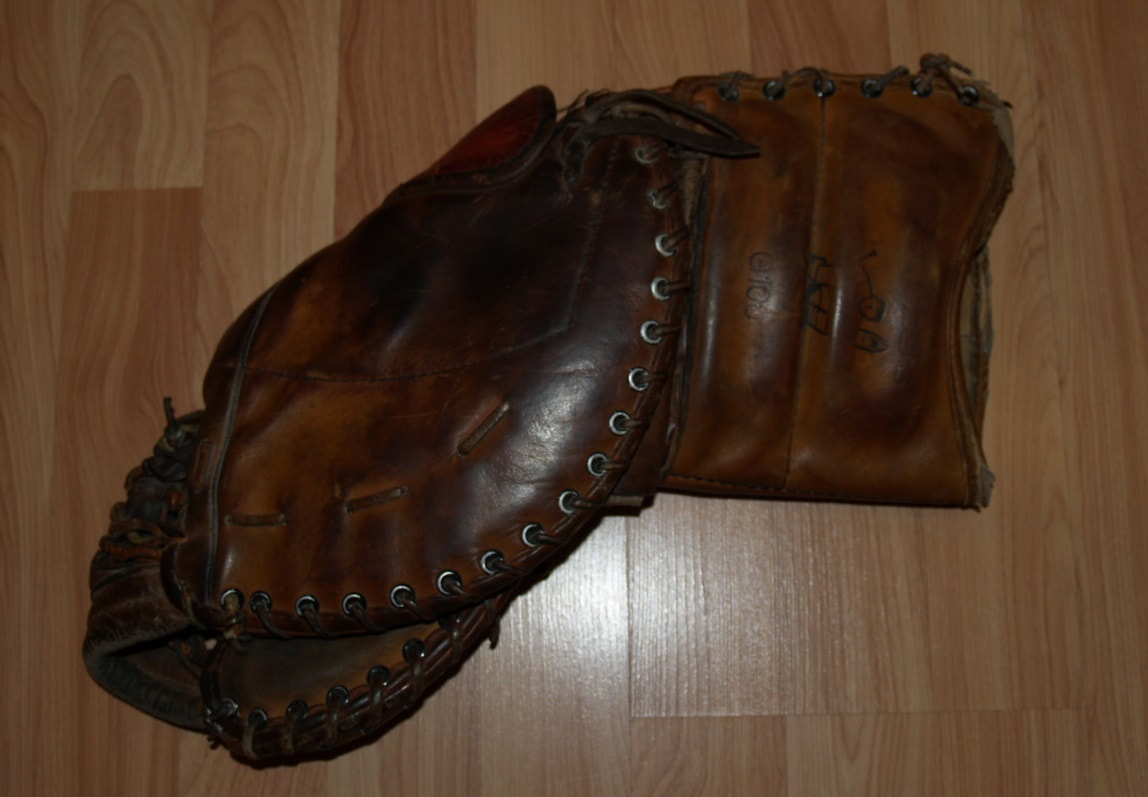 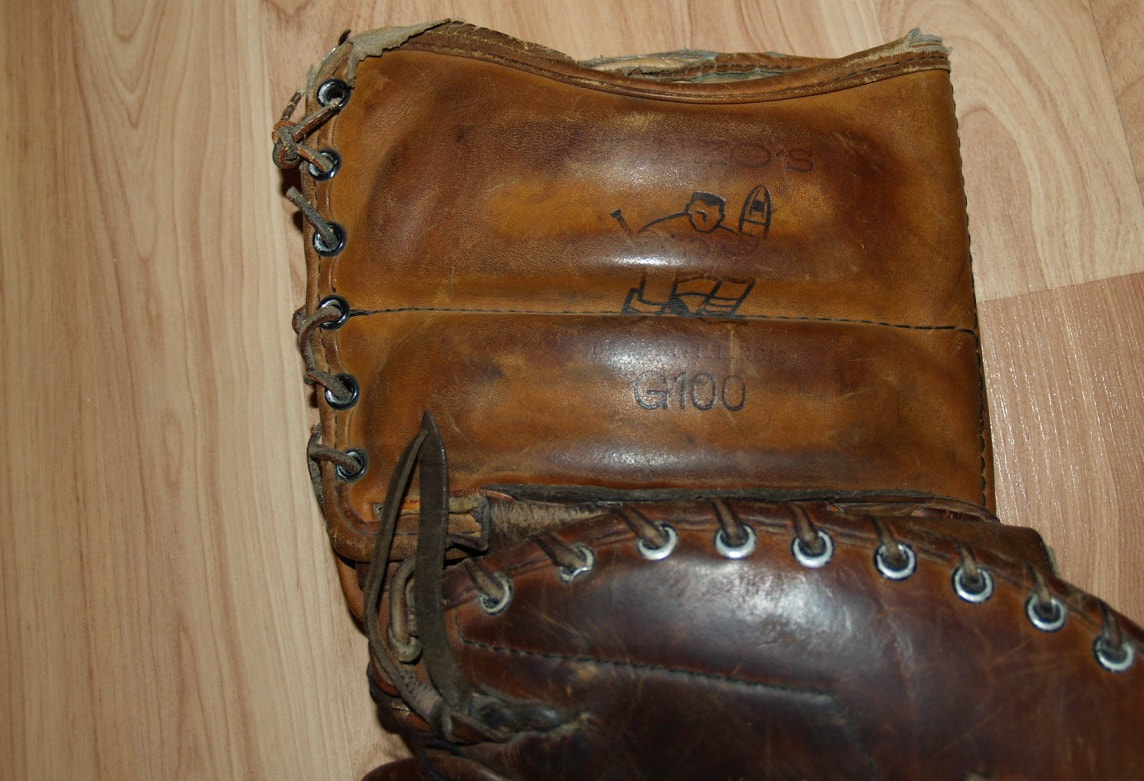 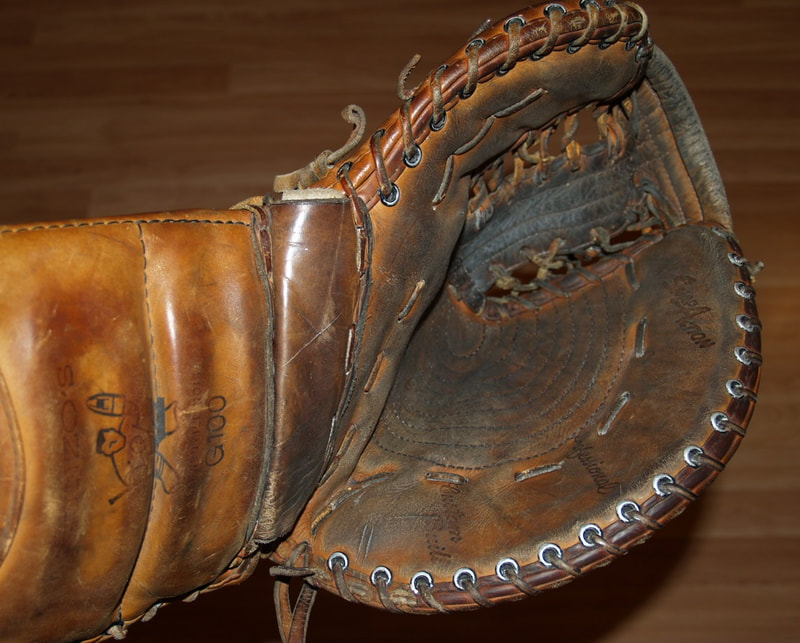 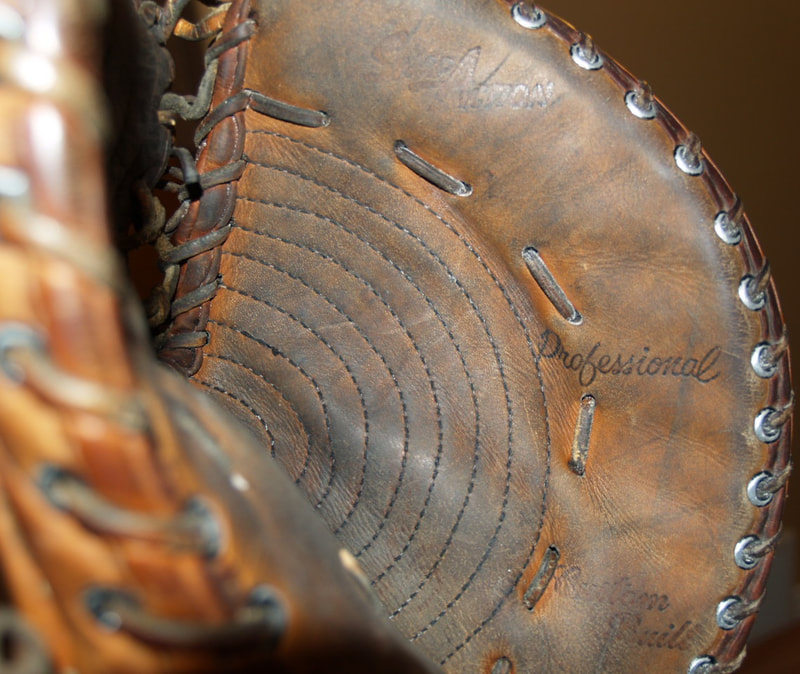 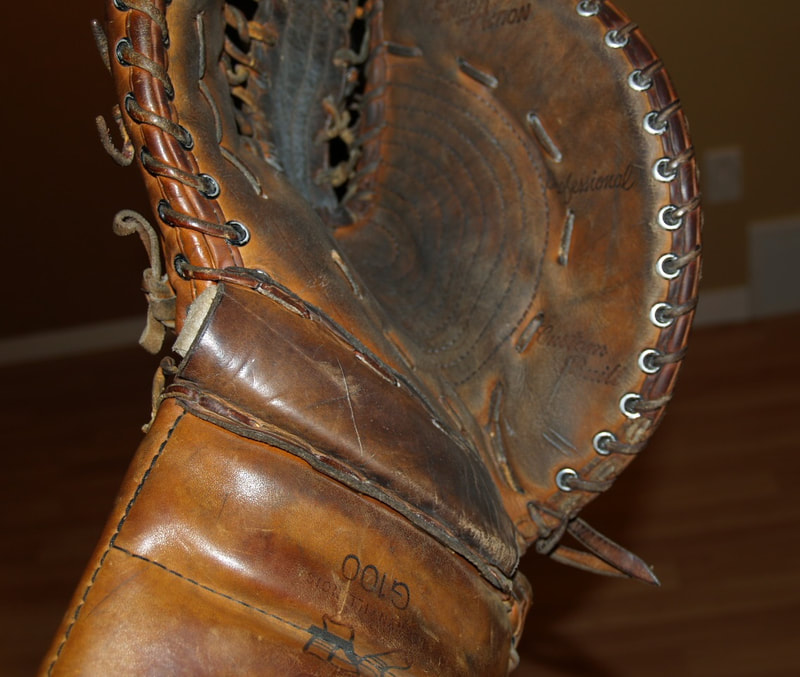 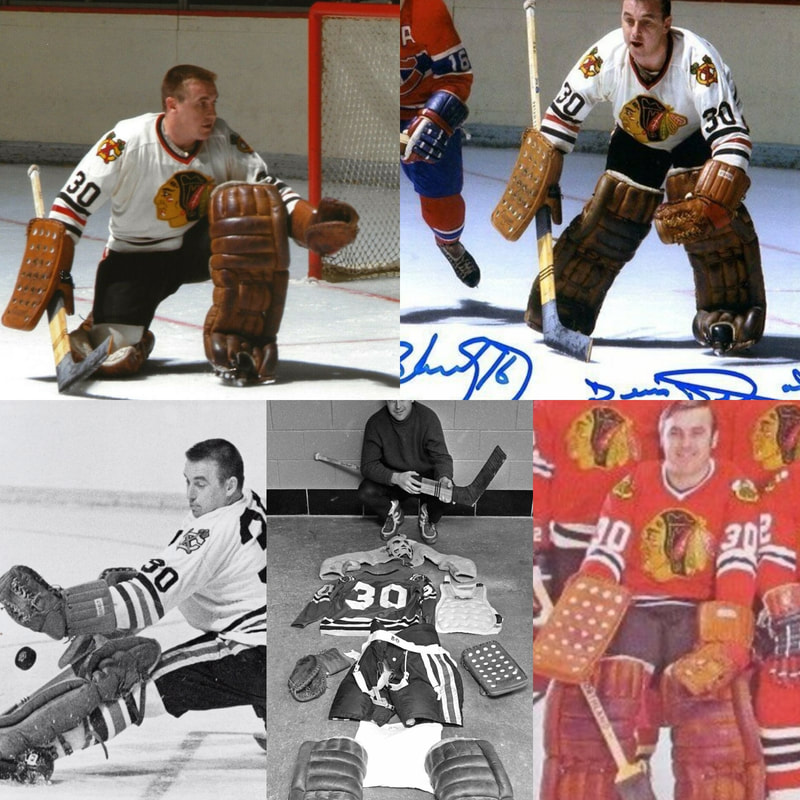 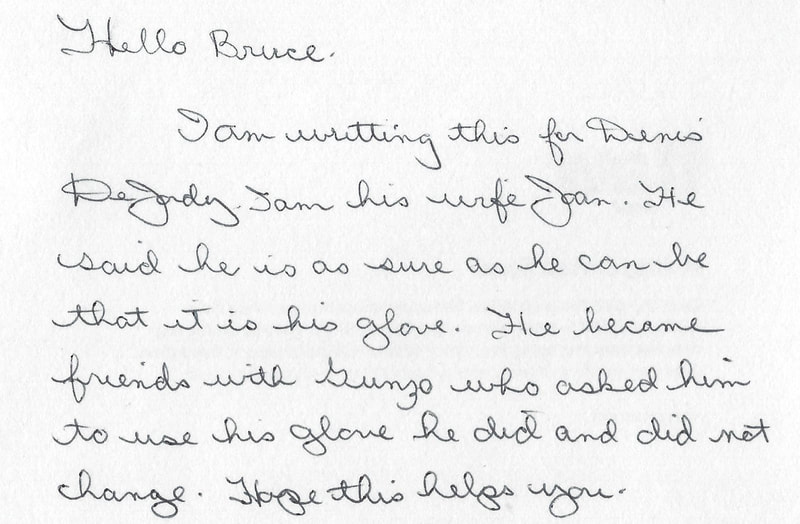