Born on September 4, 1963 in Detroit, Michigan, Vanbiesbrouck was a touted prospect from the OHL's Sault Ste. Marie Greyhounds. After being drafted 72nd overall by the Rangers in 1981, he made his NHL debut the following season on December 5, 1981, stopping 29 of 30 shots in a victory over the Rockies. The next season, he spent the entirety of it in the OHL. The following year, he played predominantly in the CHL before making the full-time jump to the pros in 1984-85. He put up starter minutes for the Rangers, even winning the Vezina Trophy in 1985-86, all the way until the end of the 1992-93 season when Mike Richter made him redundant.

In Florida, he was the team's first ever franchise goaltender, eventually leading them to the Stanley Cup Final against Colorado in 1995-96. Though they were swept in four games, it showed that even a lowly expansion club in a "non-hockey" market could make it somewhere. Vanbiesbrouck remained in Florida until the end of the 1997-98 season when he was acquired by Philadelphia. He played two seasons as a started over there before getting in part of a season with the Islanders in 2000-01. Midway through that campaign, he was acquired by the New Jersey Devils. He wanted to retire after the 2000-01 season, however, he was convinced to return for one more year in 2001-02.

What you are looking at now is a stick used by Vanbiesbrouck at some point during the 2001-02 campaign as a member of the New Jersey Devils. 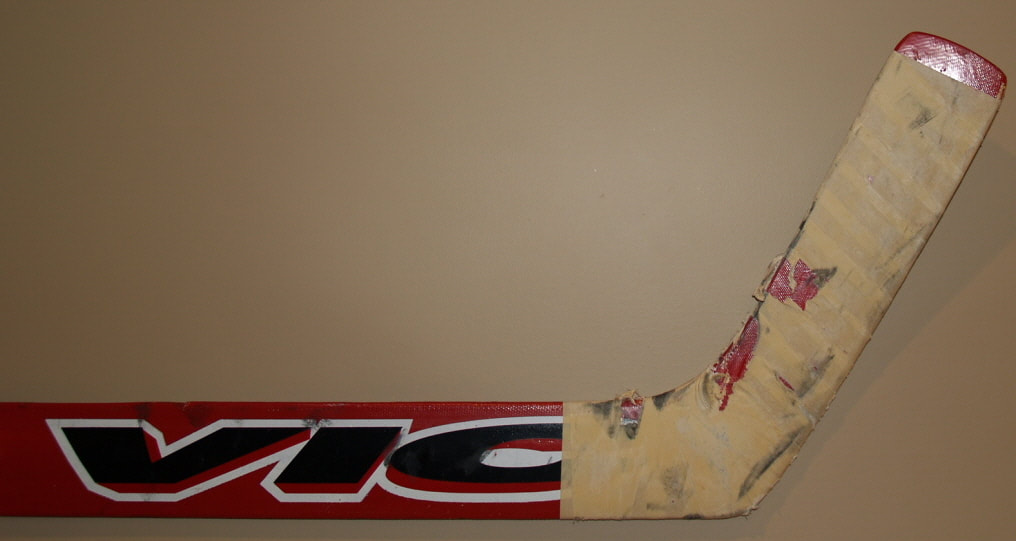