​Born on January 7, 1968 in Toronto, Ontario, Canada Mike Rosati is an Italian-Canadian who was the starting goaltender of the Hamilton Steelhawks and then Niagara Falls Thunder in the OHL. Drafted 131st overall by the New York Rangers in 1988, he earned his first NHL recall with them that season, though he never played a game with them. He left North America in 1990 and then played in Italy for HC Bolzano, and with Team Italy in international play over the next six seasons before heading to Germany to play with Adler Mannheim. In 1998-99, Mr. Rosati returned to North America when he was signed by the Washington Capitals as a free agent. He spent the majority of the season split between the Portland Pirates and the Manitoba Moose. However, while on recall with the Washington Capitals due to an injury to usual backup, Craig Billington, the moment he had been waiting for since 1988-89 occurred. On November 7, 1998, after Olaf Kolzig surrendered 5 goals on 15 shots, in went Mike Rosati. In just a bit under 30 minutes of play, Rosati stopped all 13 shots that he faced en route to the Caps winning the game against Ottawa 8-5.  He returned to Europe the next season and he played the remainder of his pro career in Germany, while also getting the chance to represent Team Italy in many games as well. Rosati retired from play in 2004 and found a passion for coaching as he assisted Adler Mannheim (DEL) in 2004-05, then took on goaltending coach/assistant coaching duties with Barrie in the OHL from 2010-2017. Since 2018-19, Rosati has been the goalie coach as well as a scout with the Vegas Golden Knights in the NHL.

What you are looking at right now is an IIHF Team Italy game worn jersey that was used by Mike Rosati in various international games between 2000-2002. The nameplate was removed by Team Italy and the 2006 Torino patches were also seemingly added on later by them. There is lots of wear on it including puck and stick marks, pilling, evidence of a nameplate removal, and a stain on the shoulder. This is a fine piece of a very popular goaltender.

Dates of Game Use:
Various international games between 2000-02.

Photomatched: No, referenced to style. 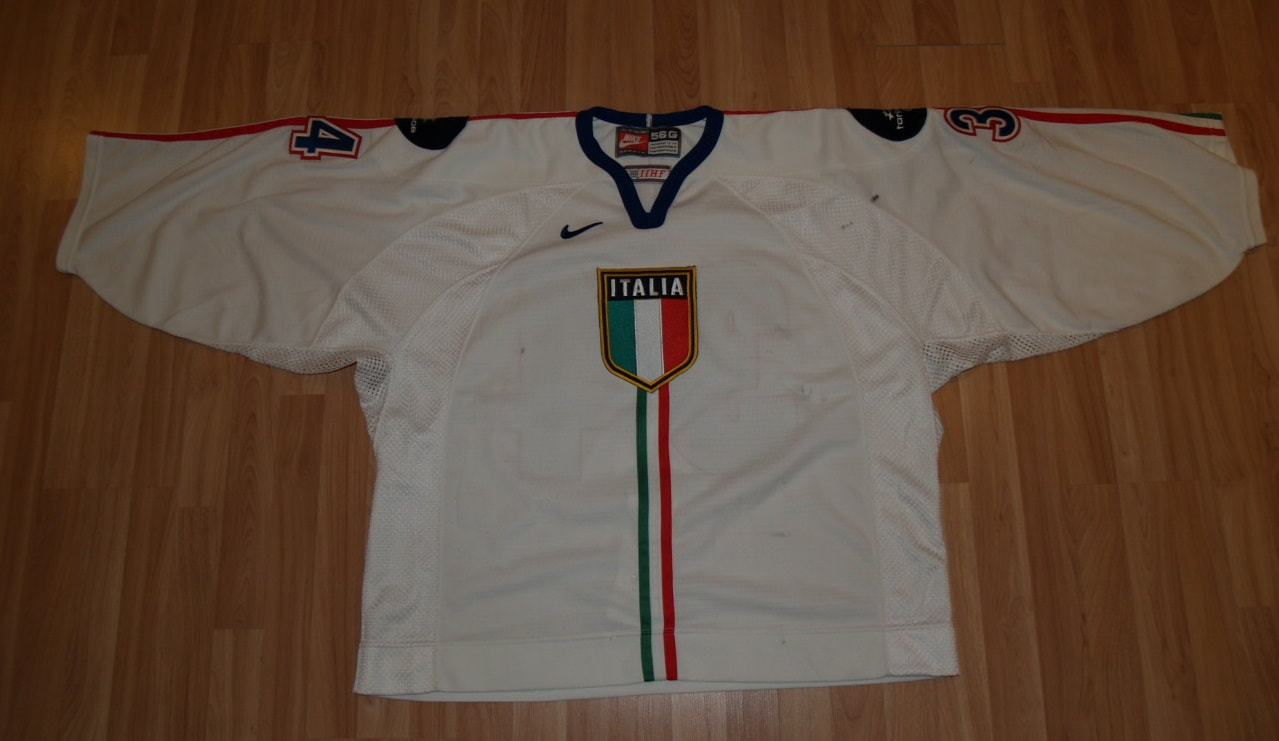 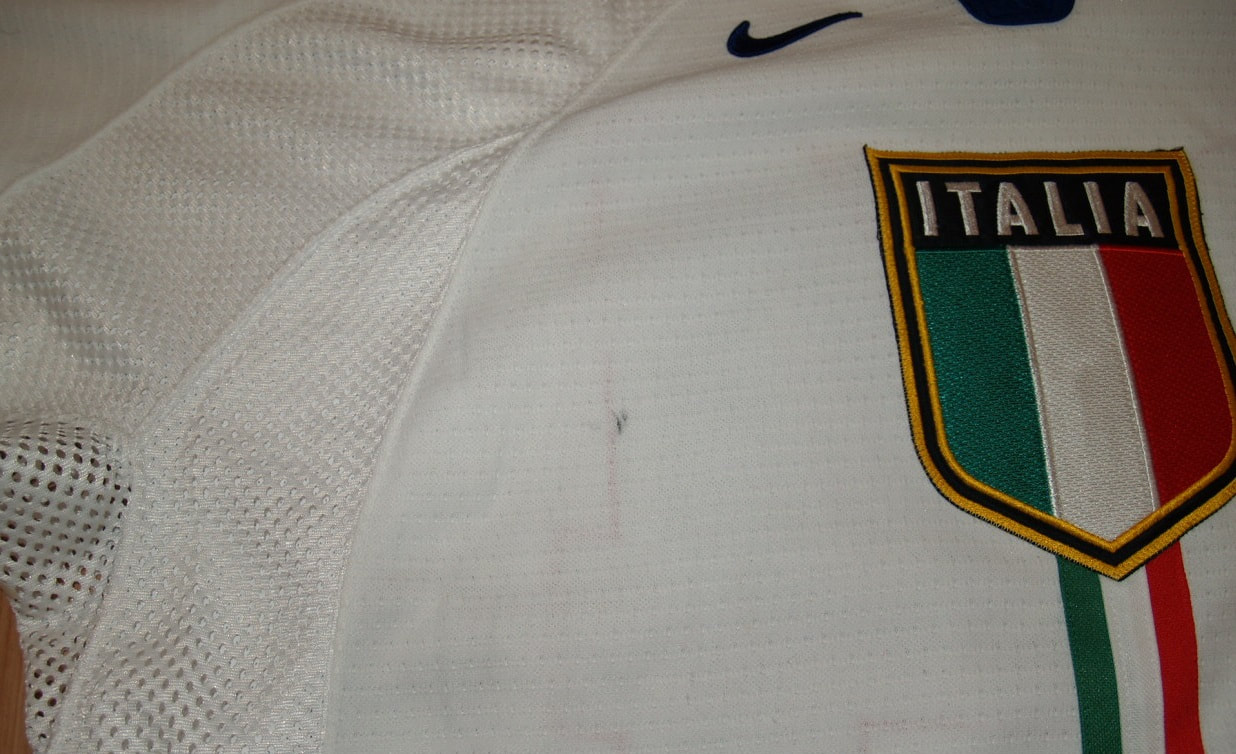 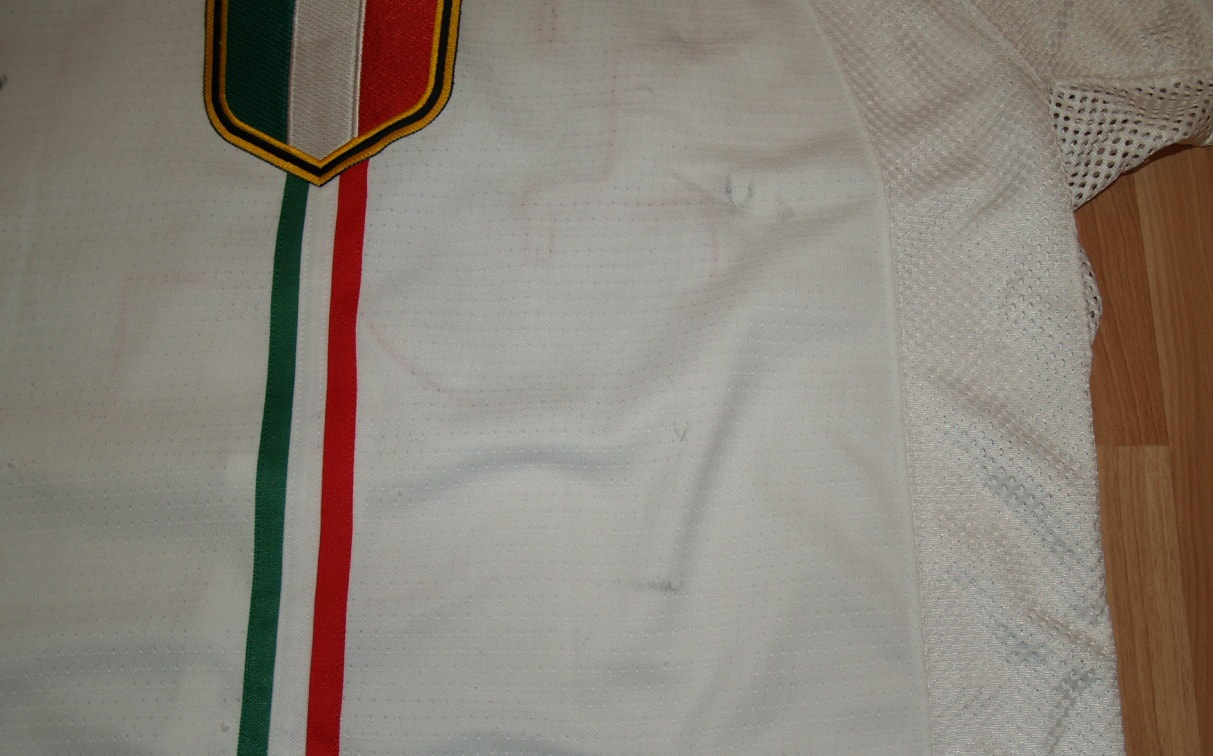 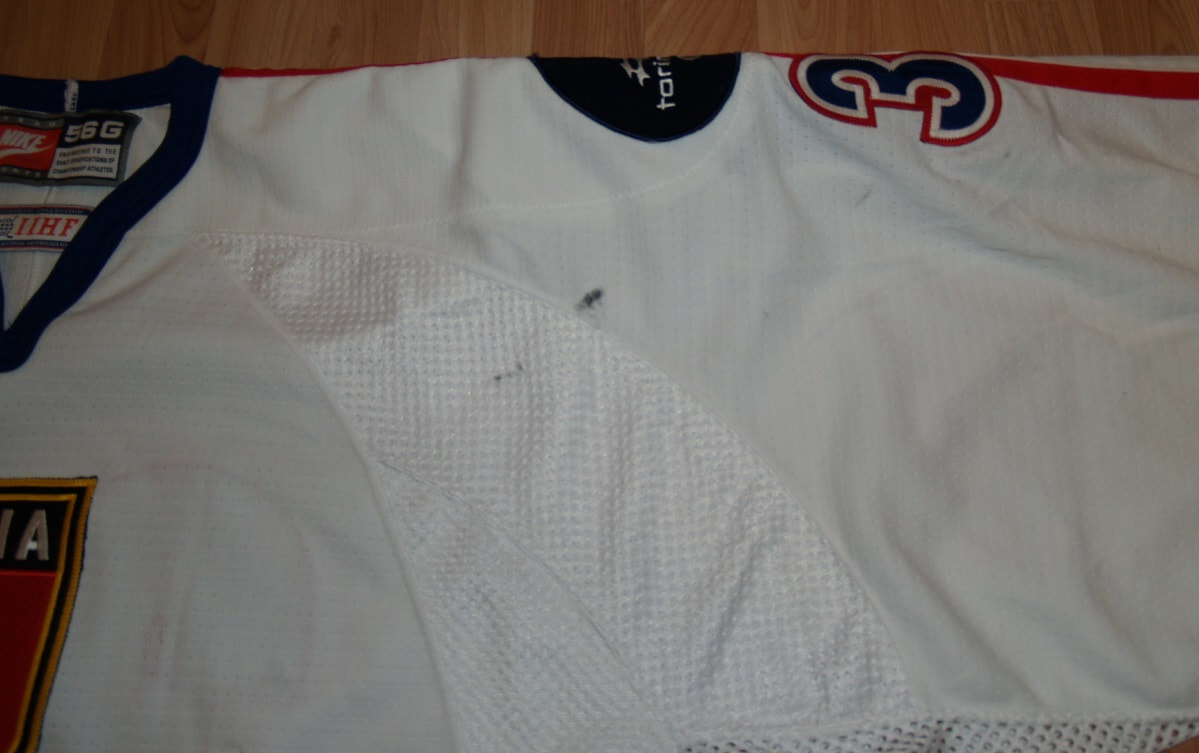 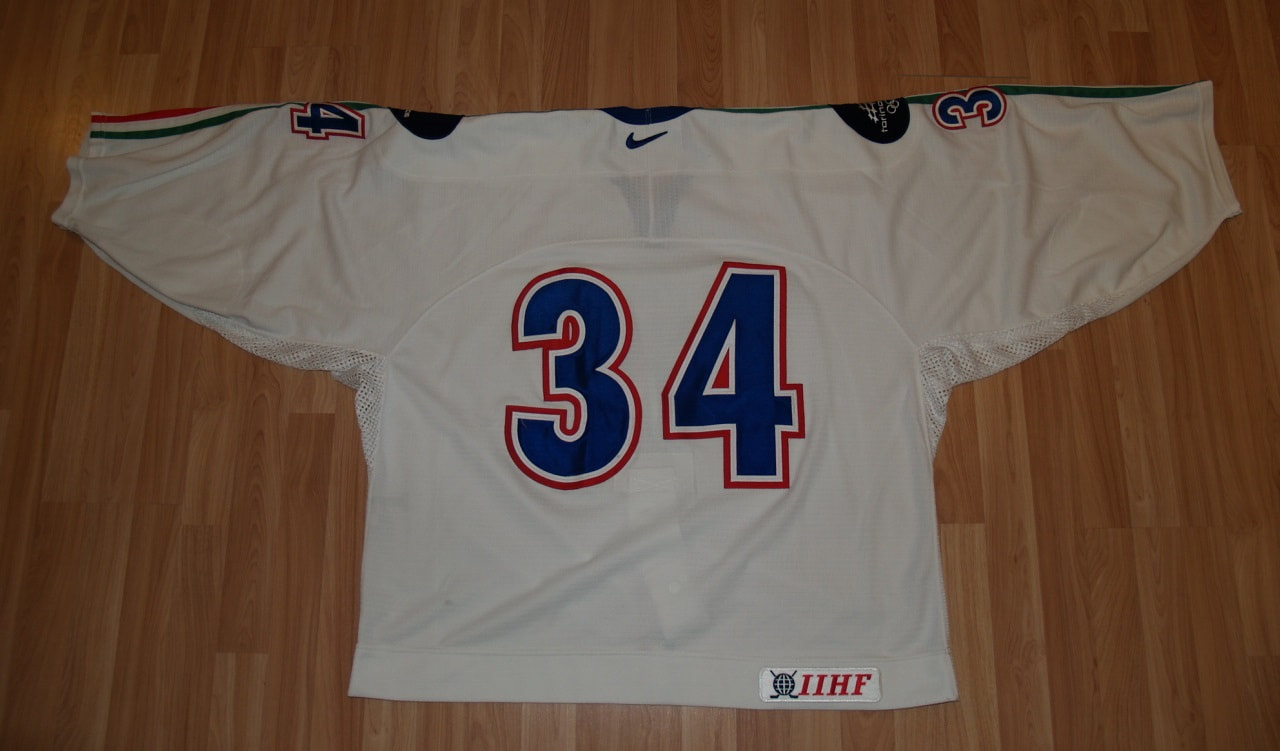 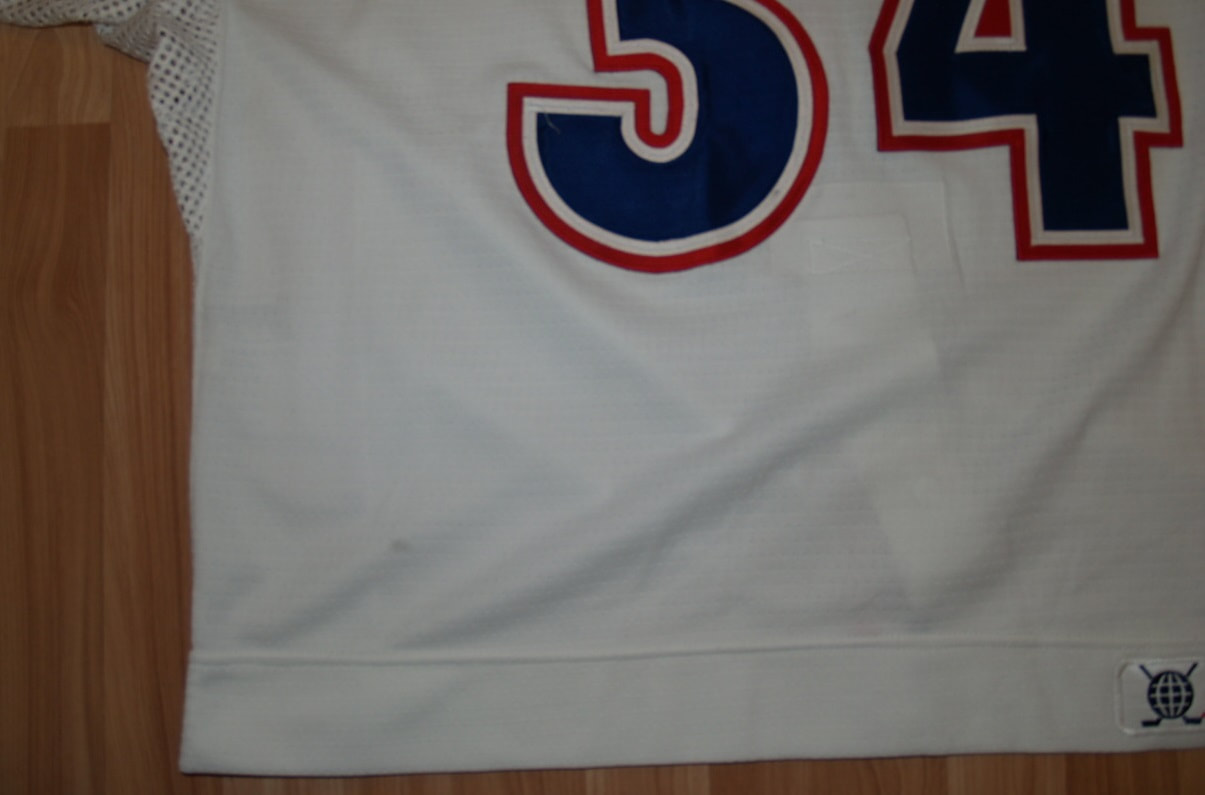 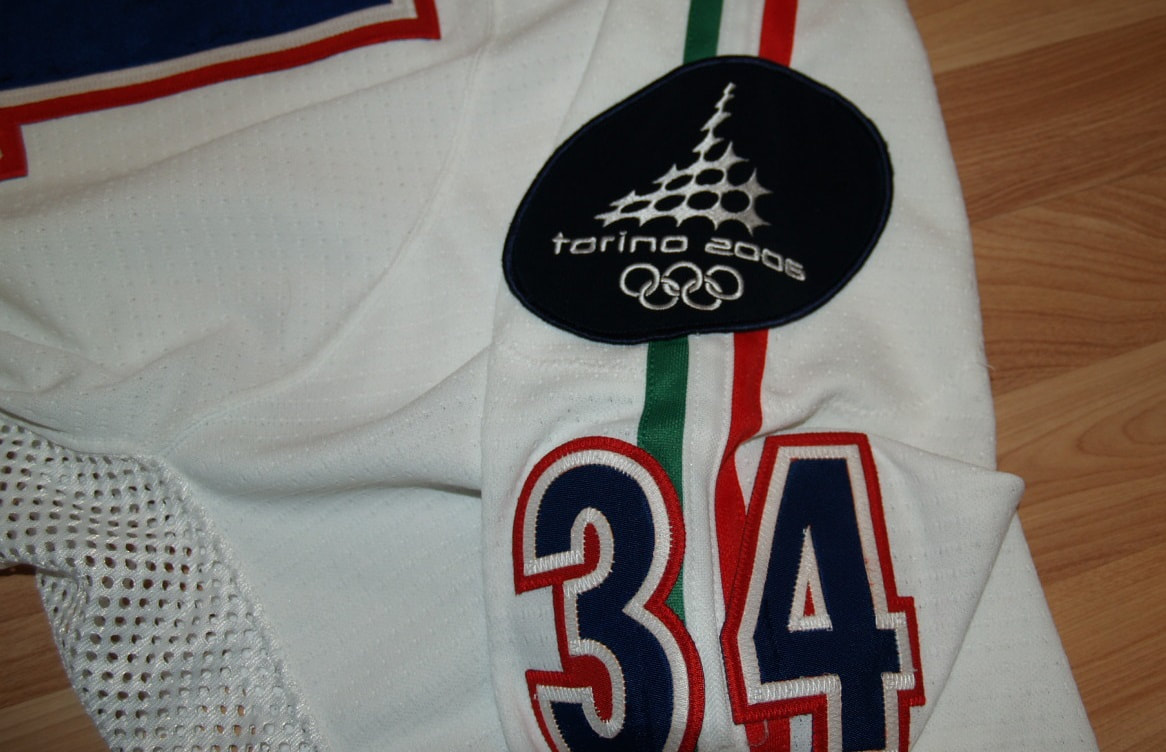