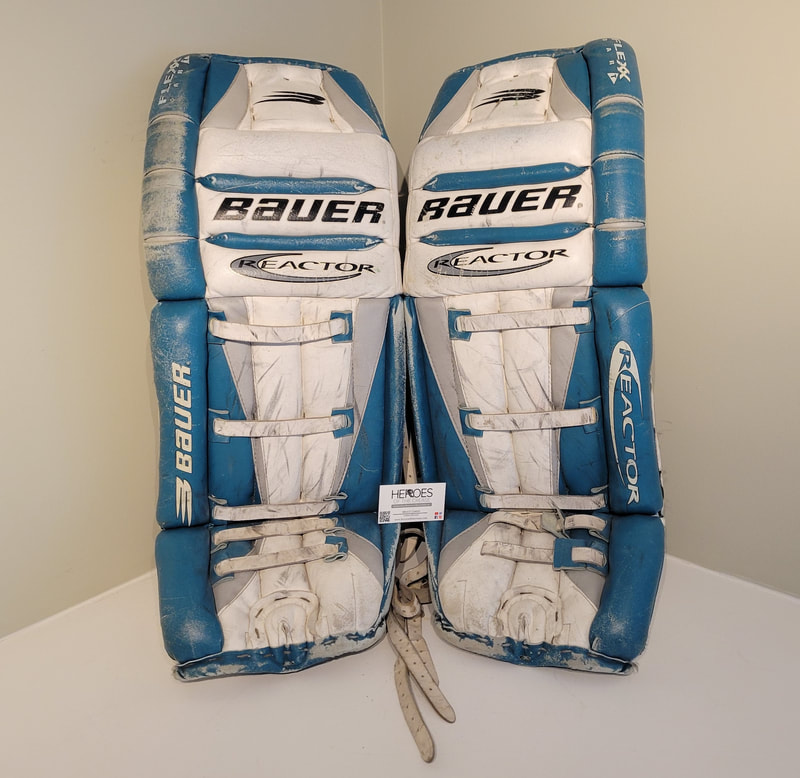 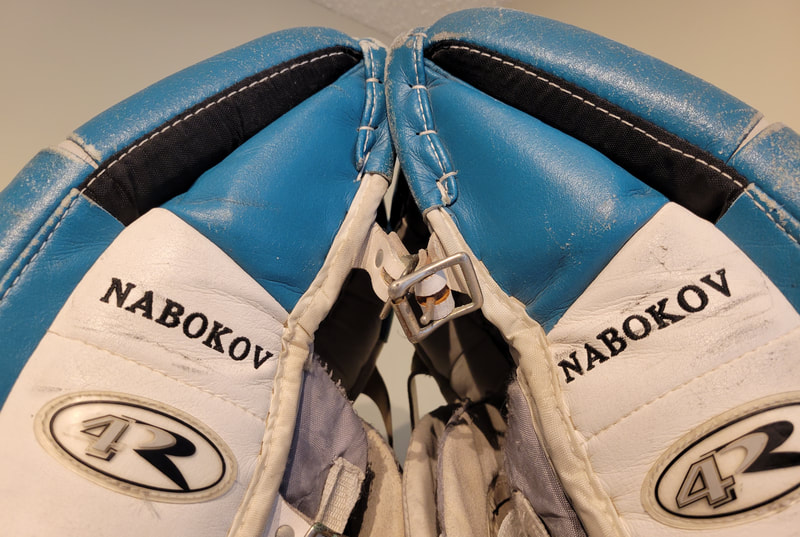 Born on July 25, 1975 in Ust Kamenogorsk, Kazakhstan, Evgeni Viktorovich Nabokov was a star goalie in his home country when he was drafted 219th overall by the San Jose Sharks in 1994. After making a huge impact in the Russian leagues, Nabokov came to North America in 1997, then after two seasons with Kentucky in the AHL, Nabokov earned his NHL chance in 1999-00. After starting the season in the minors with Kentucky and Cleveland, Nabokov was recalled in December and never looked back. He made his NHL debut in relief of Steve Shields on January 1, 2000 vs the Nashville Predators. Nabby stopped all 4 shots that he faced in San Jose's 3-2 defeat. After one more relief effort on January 11, Nabokov got his first NHL start on January 19 vs the Colorado Avalanche and stopped all 39 shots he faced in a 0-0 tie. Nabokov appeared in 11 NHL games that year and by next season, he had taken over the starting role in San Jose, appearing in 66 games, getting into the All-Star game and also winning the Calder Trophy as the NHL's rookie of the year.

The next season, Nabby only got better, appearing in 67 games, and recording 7 shutouts. On top of that, he became the first European goalie in NHL history to score a goal when he shot the puck into the empty net vs Vancouver on March 10, 2002. Nabokov continued his dominant play thereafter, even leading San Jose into the Conference Finals in 2004. In 2005-06, Nabokov struggled as many goalies did with the faster paced NHL, but he fortunately bounced back in 2006-07 before recording a career year in 2007-08. He appeared in 77 games, was once again an All-Star, recorded a career best 46 wins (which also led the league) and a career best 2.14GAA. After losing in the second round of the playoffs, Nabokov then went on to play for Russia in the IIHF World Championships where he led the team to the Gold Medal, while being named the Best Goaltender of the tournament and leading the tournament with the Best GAA among all goalies with 1.78. After two more solid seasons as the franchise goalie of the San Jose Sharks, Nabokov headed overseas to play in 2010-11.

The Detroit Red Wings signed Nabokov that season, but due to NHL rules, Nabokov had to clear waivers before Detroit could get him. The Islanders pounced and claimed him instead. In 2011-12, Nabokov joined the Isles and appeared in 123 games with them over three seasons while posting respectable numbers. In 2014-15, he was then signed as a free agent by the Tampa Bay Lightning where he played the final 11 games of his NHL career. He was then symbolically traded back to San Jose on February 9, 2015 as he announced his retirement two days later.

What you are looking at right now is a set of game worn Bauer Reactor goalie pads that were used by Nabokov in 1999-00, from around February 2000 (they appear quite pristine when he is seen warming up in pre-game vs the Devils on February 13, 2000) until the end of the season, including Nabokov's NHL playoff debut with the San Jose Sharks. Definitively photomatched, these stunning items from the first NHL season of this star goaltender are an excellent fit into the museum!

Acquired From: Michael Hogan of IceViolence

Also used in a backup capacity at least 28 times that season. 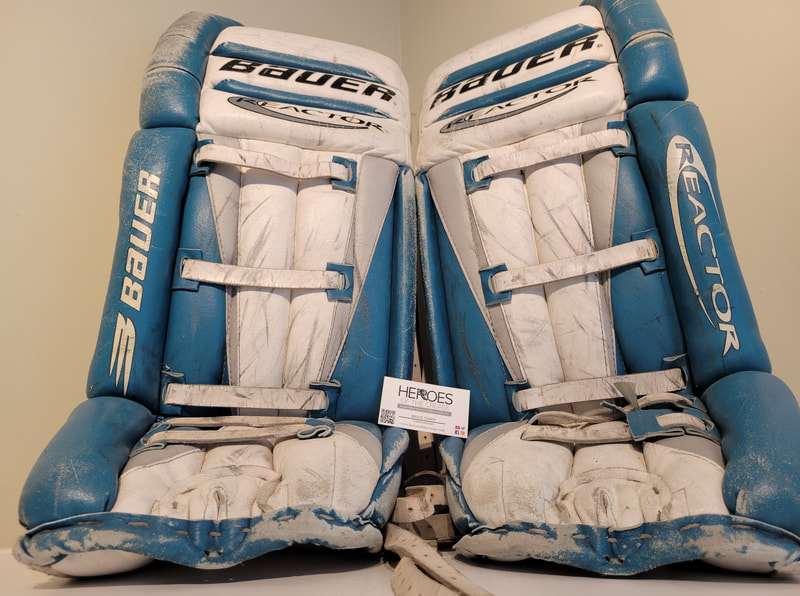 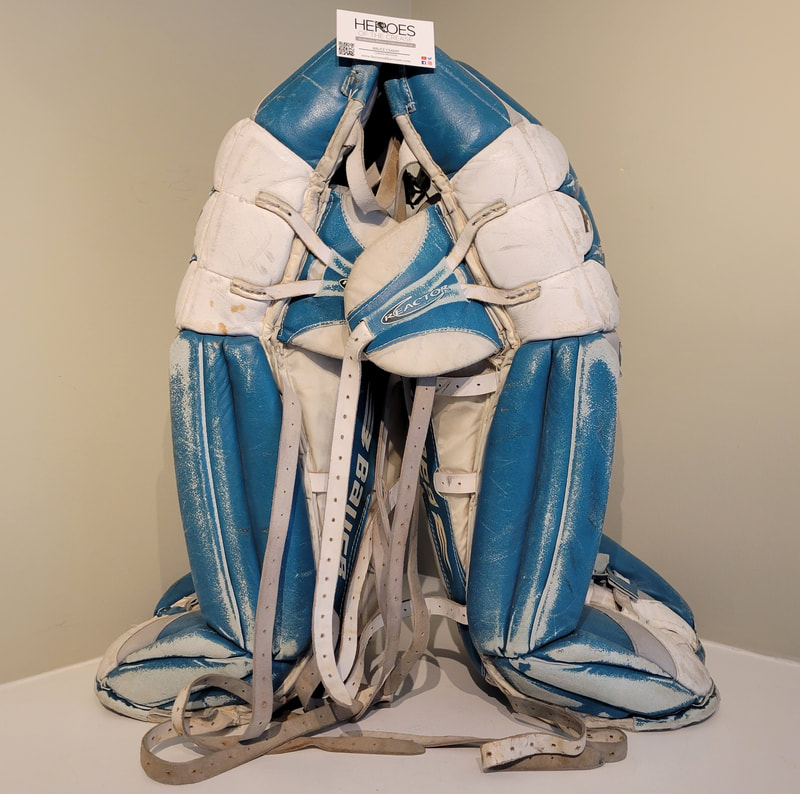 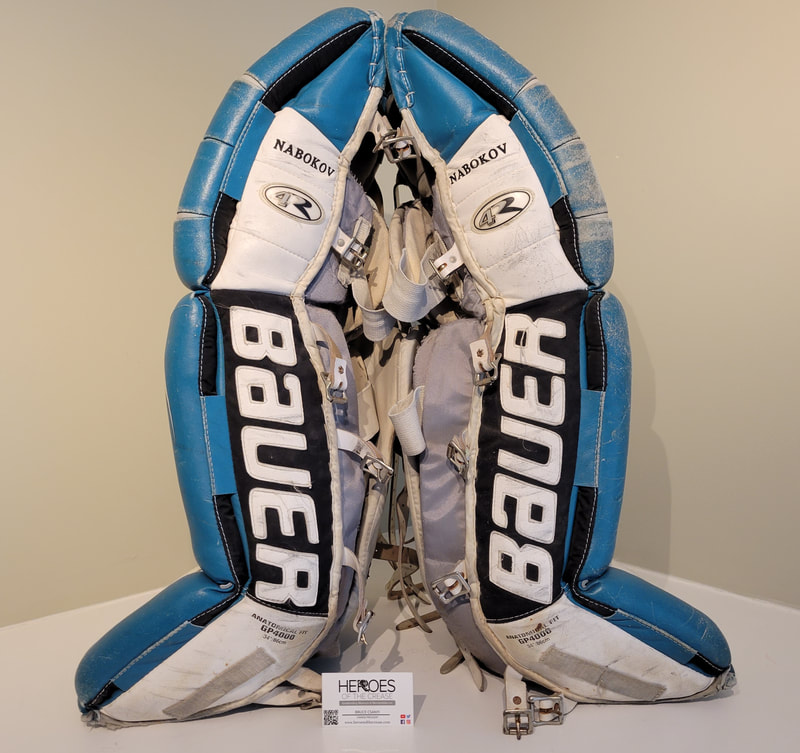 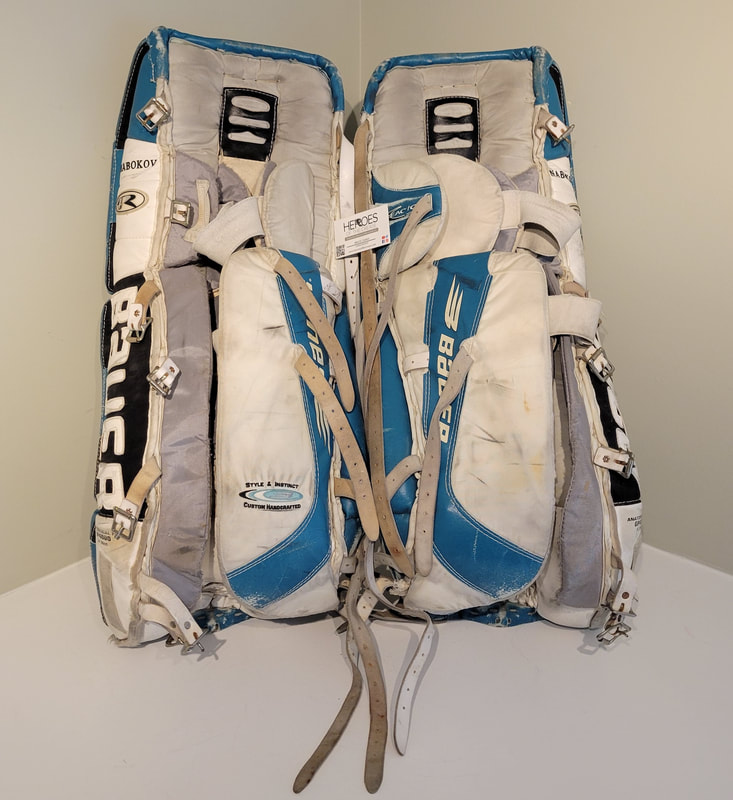 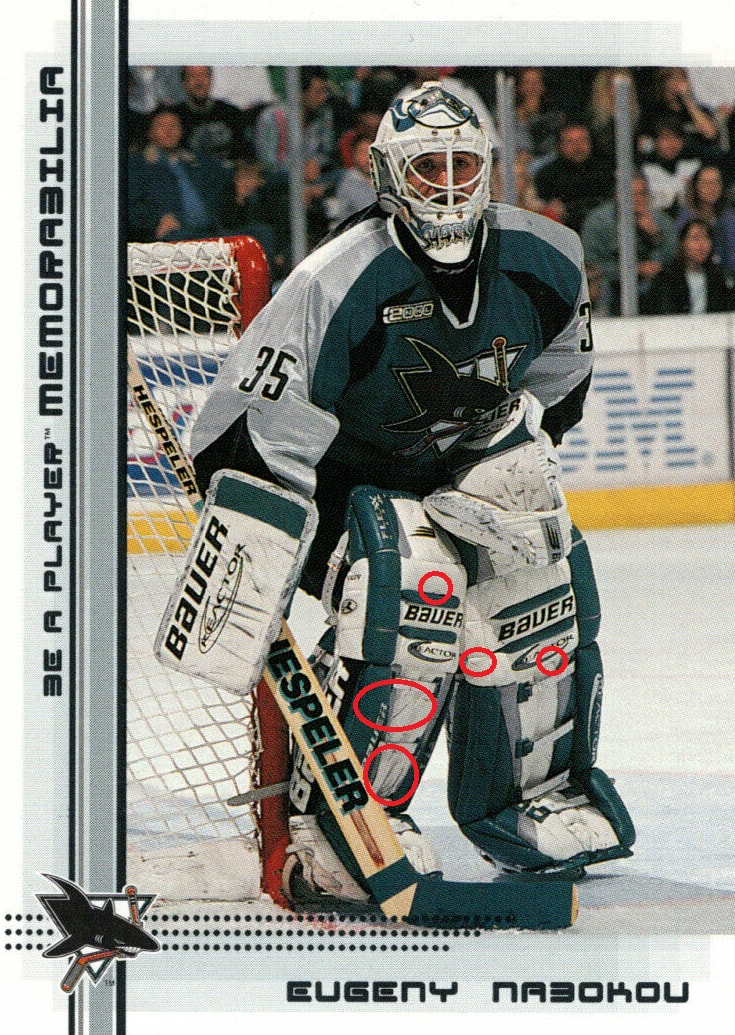 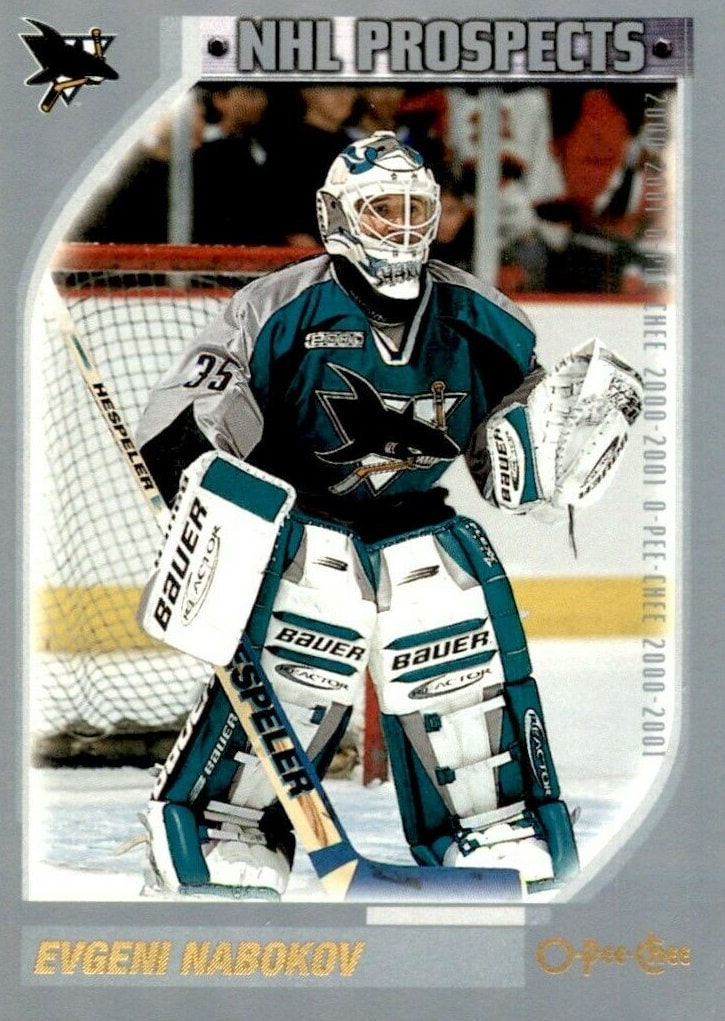 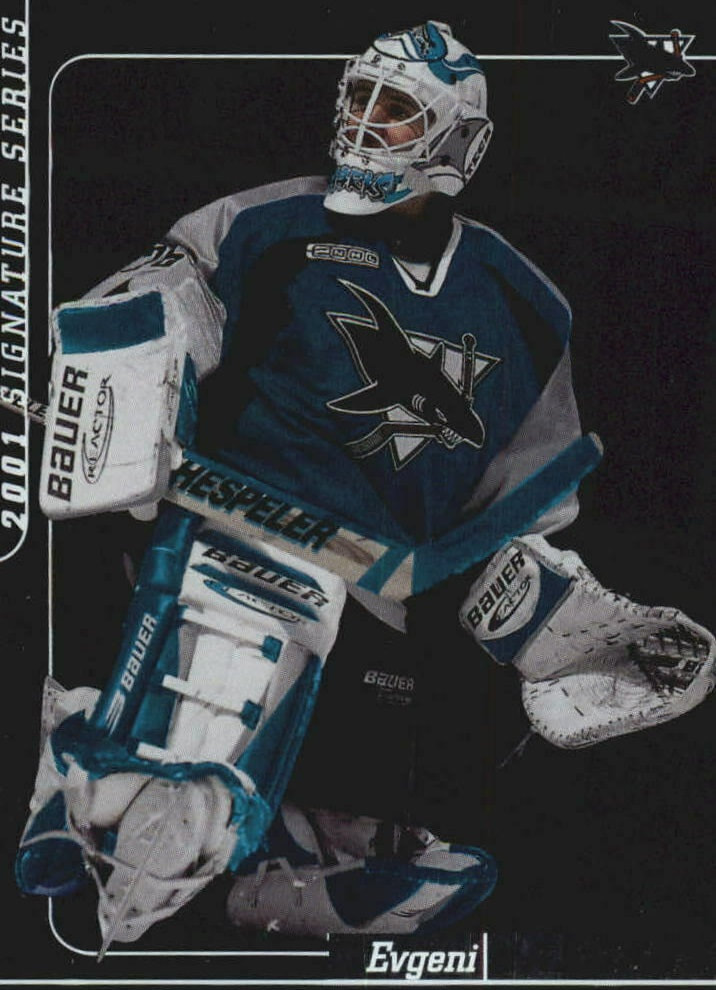 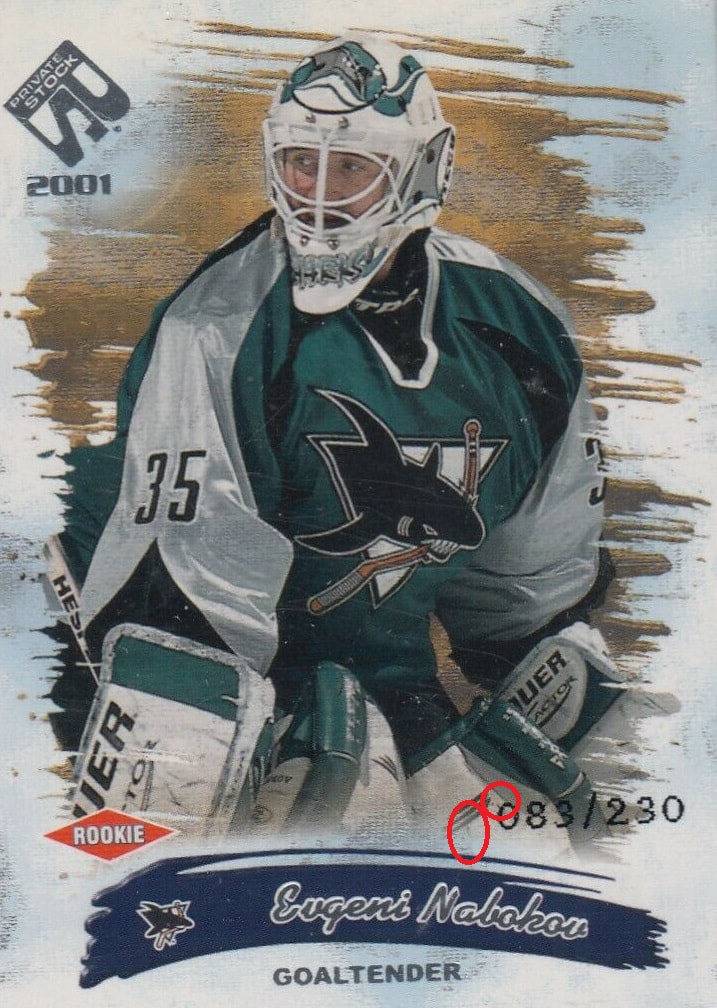 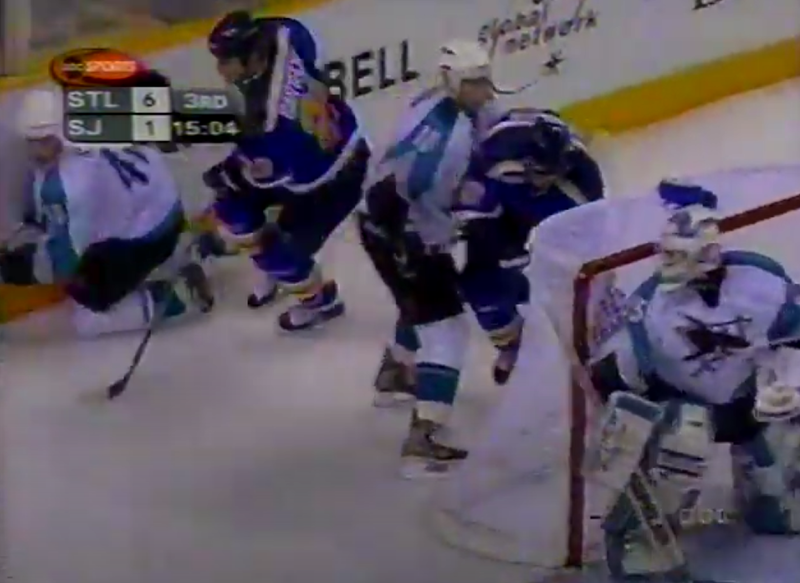