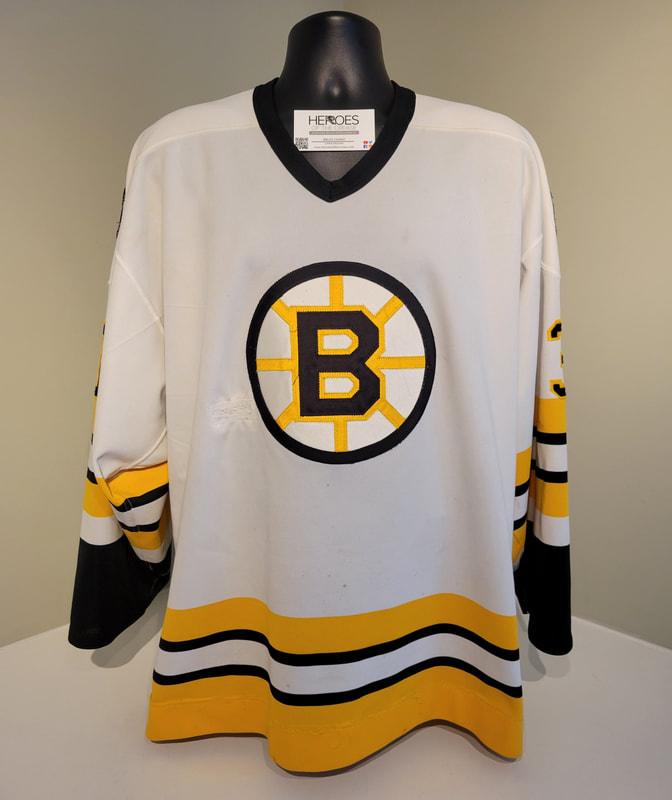 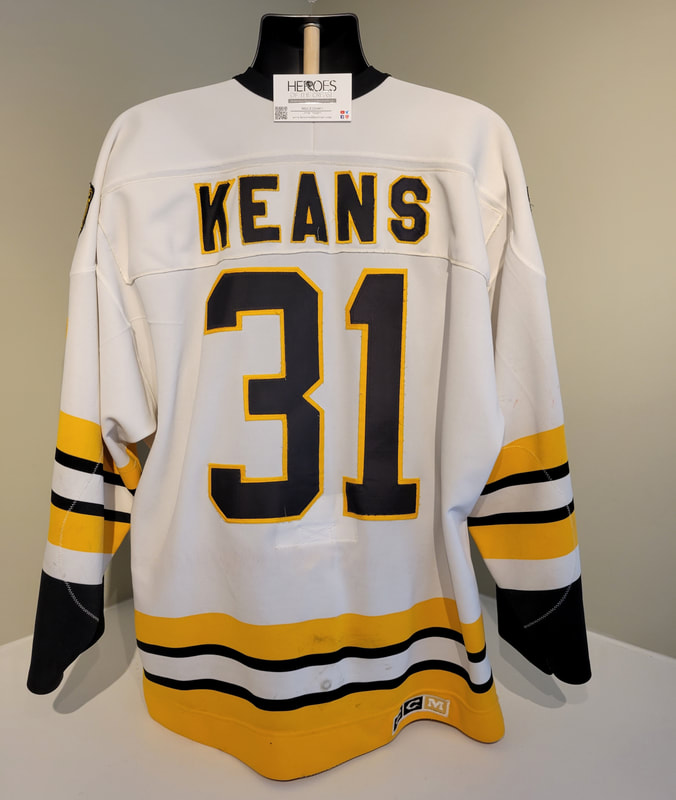 Born on January 7, 1958 in Pembroke, Ontario, this goalie was a standout talent of the Oshawa Generals of the OMJHL from 1975-76/1977-78. His name, Doug Keans. Drafted 94th overall by the Los Angeles Kings in 1978, Keans was a longshot to make the team as the tandem of Mario Lessard and Ron Grahame were proving competent between the pipes. Keans spent the entire 1978-79 season in the IHL before finally making his NHL debut in 1979-80. On February 16, 1980, Keans suited up against the powerhouse Islanders and stopped 13 of 15 shots in a 3-2 victory. In that rookie season, he saw action ten times. The following season, he saw NHL action nine times, followed by 31 games the next season. He played in six final games for the Kings in 1982-83 before being placed on waivers. The Boston Bruins took a chance on Keans and signed him. He immediately jumped into the full-time backup position, recording career highs in games (33), wins (19), and shutouts (2). After that first season in Boston, he appeared in 121 additional games for the team over four more seasons. After 1987-88, he returned to the AHL in 1988-89. He then retired from play before jumping back into the AHA/SunHL in 1992-93, and then jumping back in with the SunHL in 1995-96.

The jersey you are looking at right now is a 1985-86 Boston Bruins set II home jersey worn by Doug Keans. It was likely worn in five regular season games in that season from January, and then possibly reused for the following season's pre-season. The wear is immaculate as it features puck marks, post transfer, a lot of blood spatters and a large faded blood stain, multiple team repairs, and a fine fight strap intendation on the rear of the jersey. Keans had the fight strap undone in play, but he never actually used it, so the button made that mark over prolonged use and chafing.

Dates of Game Use: 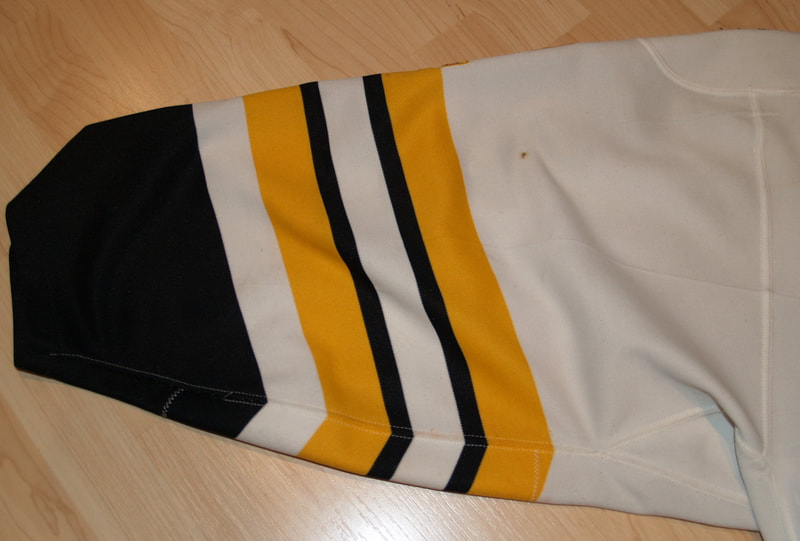 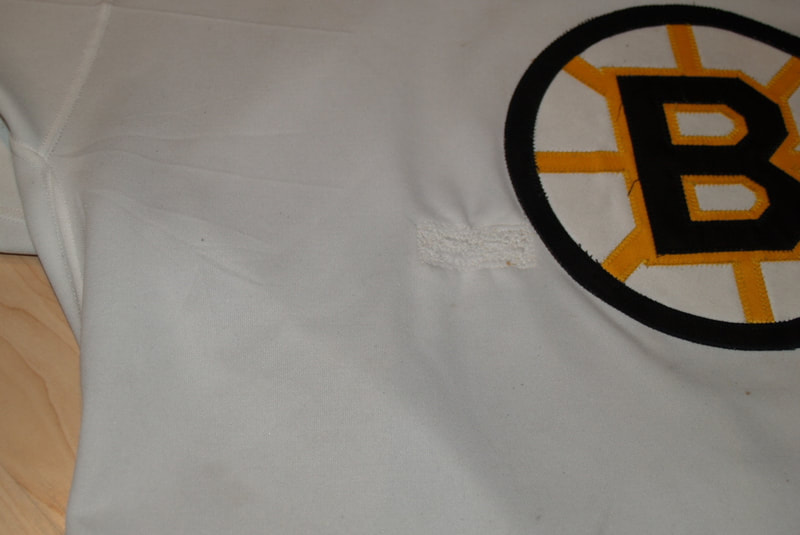 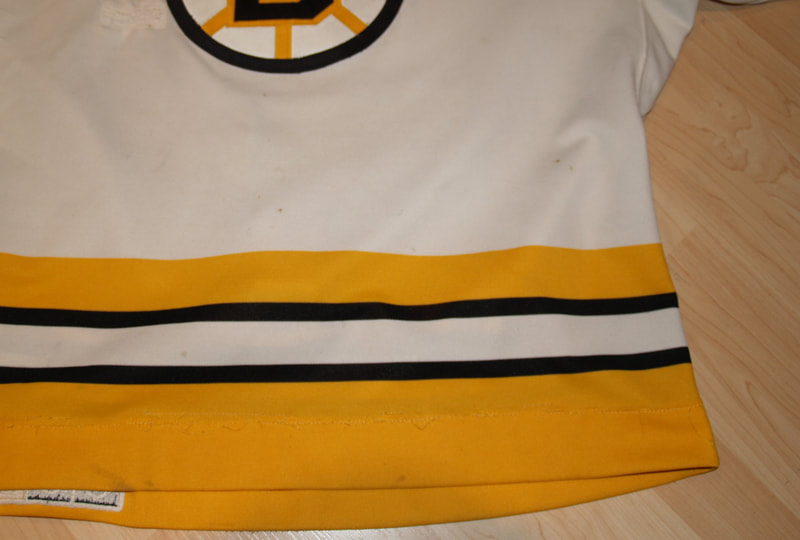 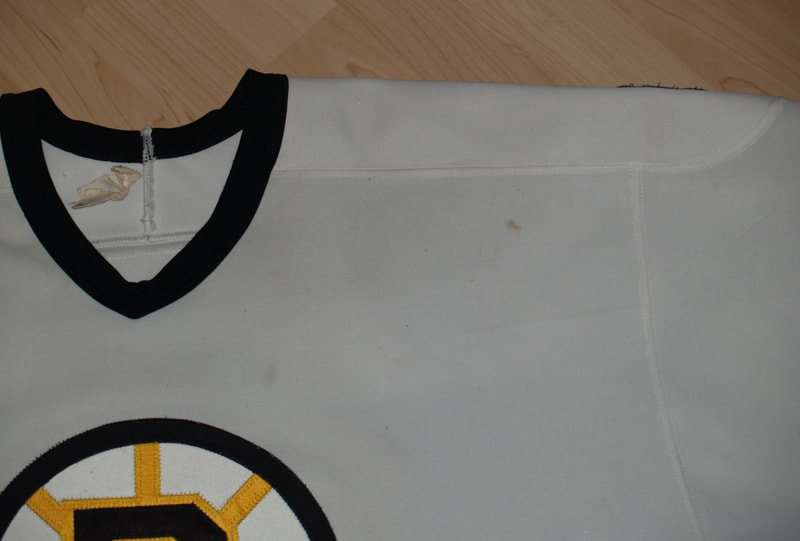 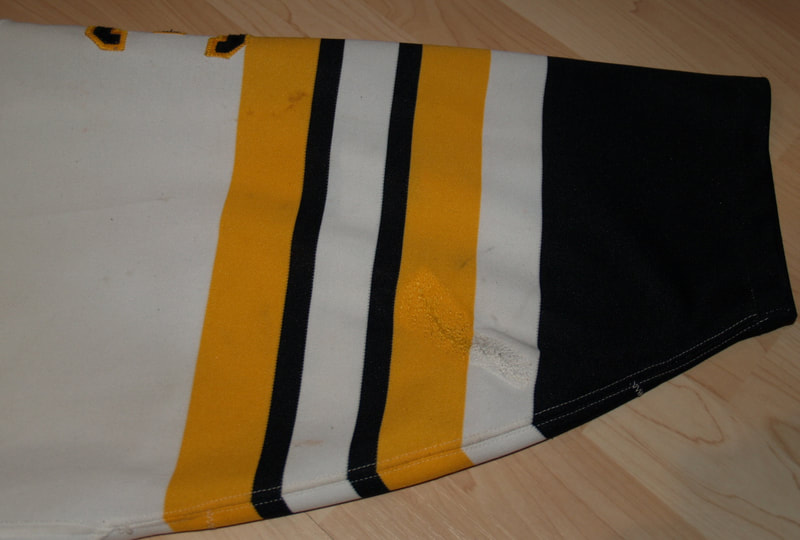 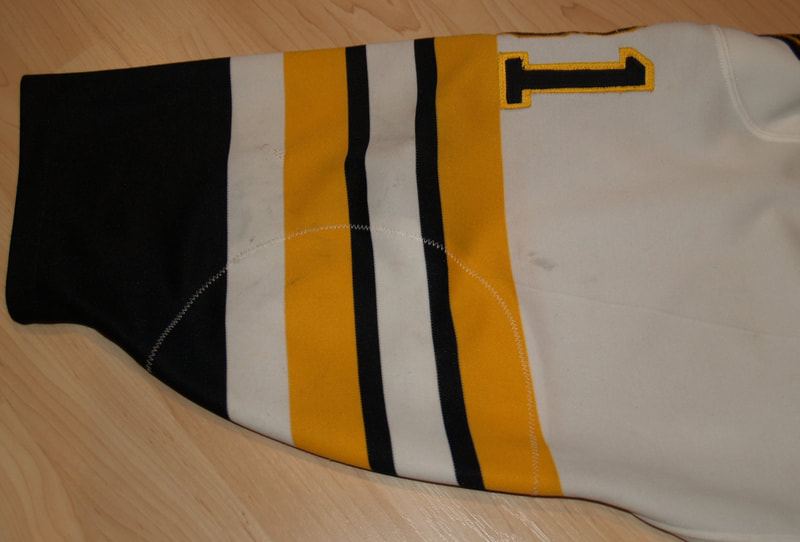 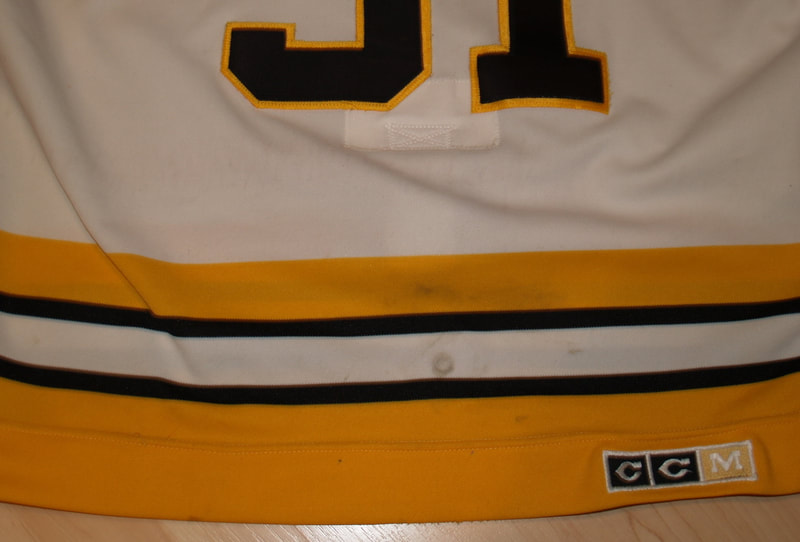 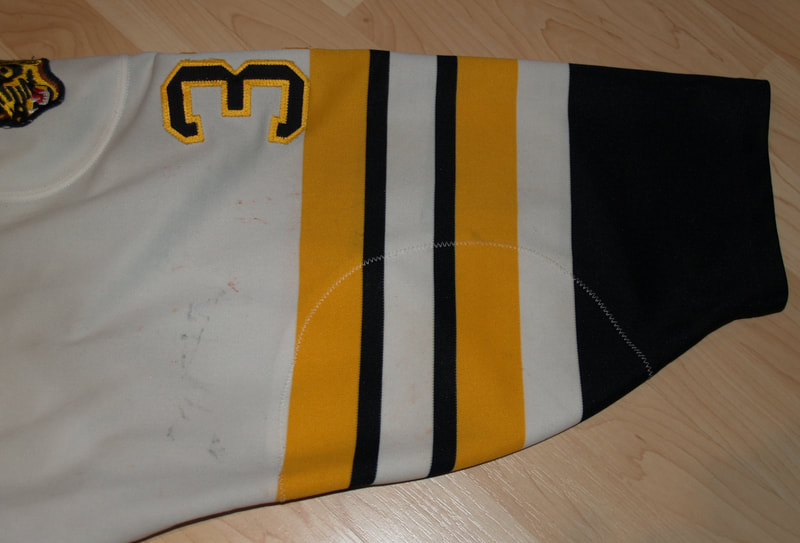 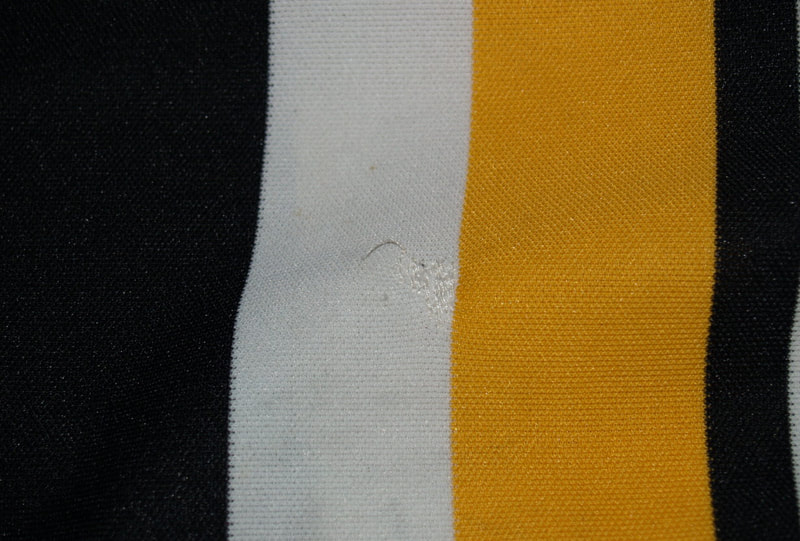 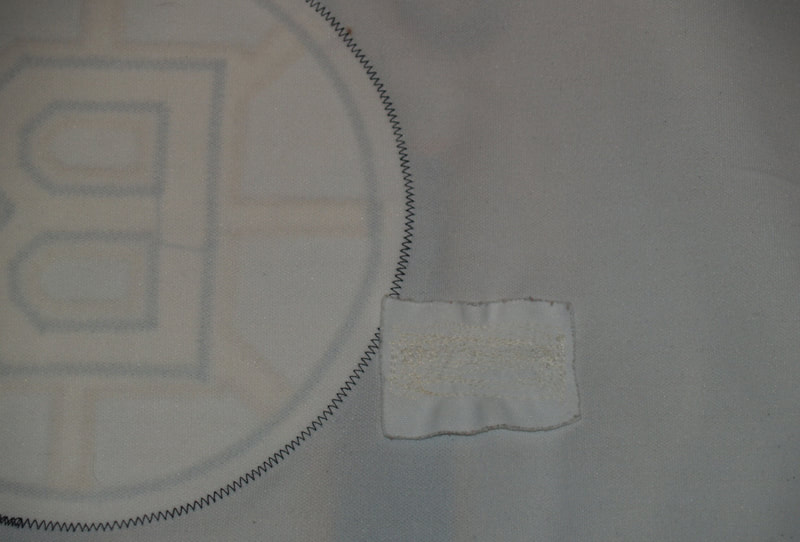 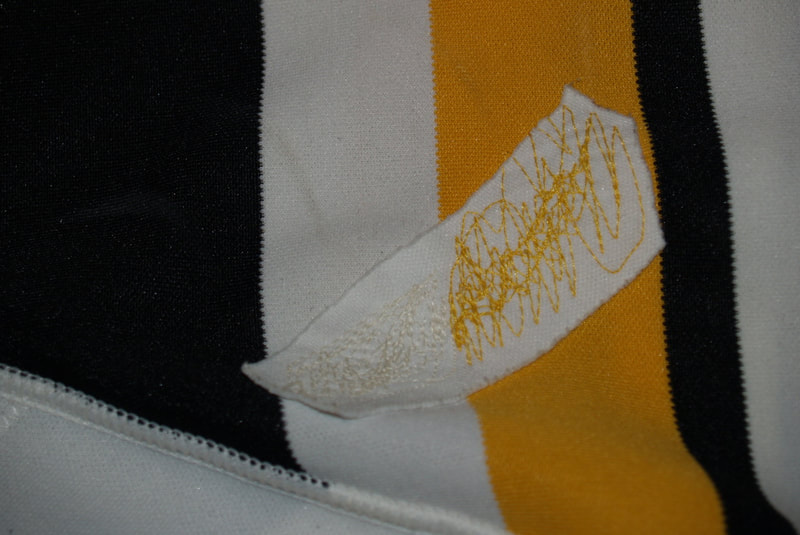 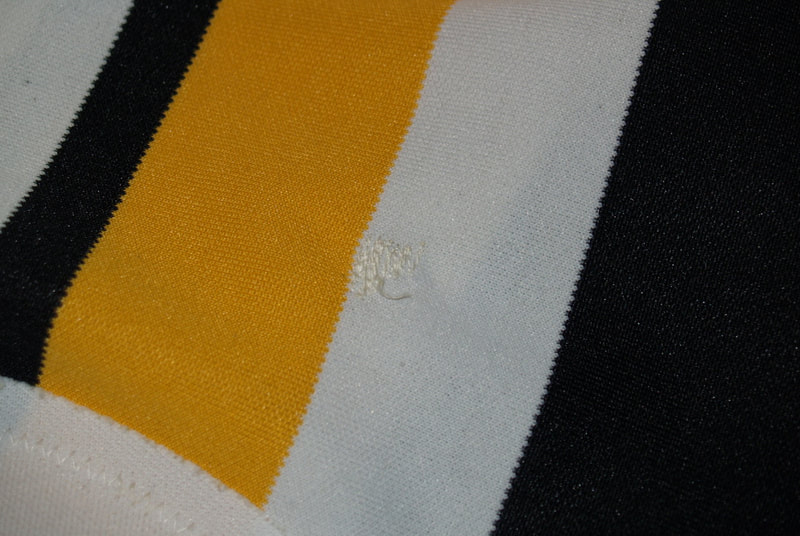 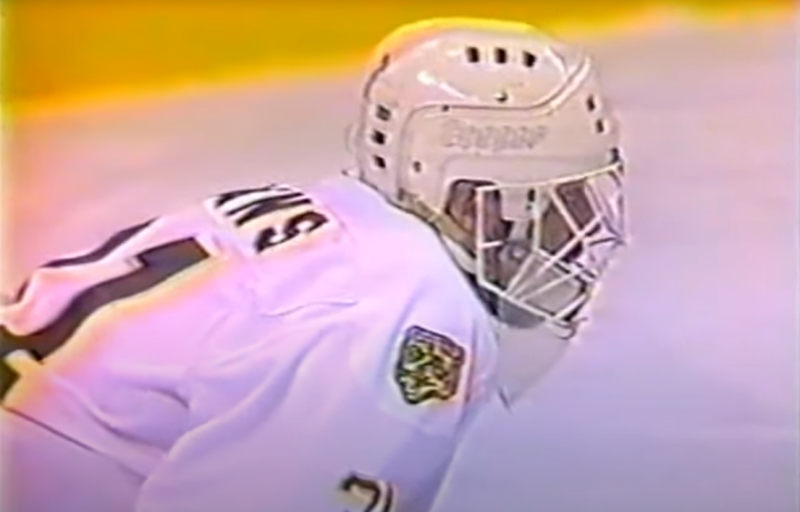