Martin Gerber was born on September 3, 1974 in Burgdorf, Switzerland. A standout prospect making waves in Europe, he was drafted 232nd overall by Anaheim in 2001. In 2002-03, he made it onto the Mighty Ducks full time as the back-up to Jean Sebastien Giguere. On October 11, 2002, it happened. Facing the Dallas Stars, Giguere was pulled after surrendering 3 goals on 23 shots. In one period of action, Gerber stopped all five shots he faced in his NHL debut. He recorded his first win in his first start 9 days later. He appeared in 22 games that season, also backing up Giguere throughout the playoffs and into the Stanley Cup Finals, which Anaheim lost in 7 games. Gerber got more responsibility the following season appearing in 32 games. Pending free agency and with Ilya Bryzgalov coming up in the ranks, Anaheim opted to trade him to Carolina in June of 2004. Though the 2004-05 NHL season was lost to the lockout, Gerber joined the Canes in 2005-06. There, he appeared in a career high 60 games, recording 38 wins. He entered the playoffs as the starter of the Canes, however, after struggling in round one against the Habs, Cam Ward went in and took them to the finish line, winning the Cup in 7 games against Edmonton. Gerber did, however, record a key win with a shutout against Buffalo in the Conference Finals when Cam Ward struggled, so without Gerber, a Cup Final may not have occurred for Carolina. With Cam Ward's emergence in those playoffs, Carolina didn't want two number one goalies, so Gerber was the odd one out for the Canes. Ottawa signed him as a free agent. In 2006-07, he backed up Ray Emery en route to another Stanley Cup Final, which Ottawa lost against Anaheim. Gerber was the starter of the Sens the following season, then in 2008-09, he was placed on waivers and claimed by Toronto. He played 12 games with the Leafs that season before heading to Europe in 2009-10. He returned to North America in 2010-11, signing with the Edmonton Oilers. Though he spent the majority of the season in Oklahoma City, he did appear in 3 games with Edmonton, recording 3 wins and a 0.958% save average. He returned to Europe thereafter and remained there until he retired from play in 2017. Since then, he has taken up coaching in his native Switzerland.

What you are looking at right now is a Sherwood goalie blocker used by Martin Gerber in the 2003-04 season with the Anaheim Mighty Ducks. Definitively photomatched, this is a stunning piece of goaltending history. The top of it had the lacing removed, possibly to patch another of his blockers, I can't say for sure.

Acquired from: Private collector on eBay

Dates of game use: Various points throughout 2003-04 season (1 of 3 or so identical blockers used by Gerber that year) 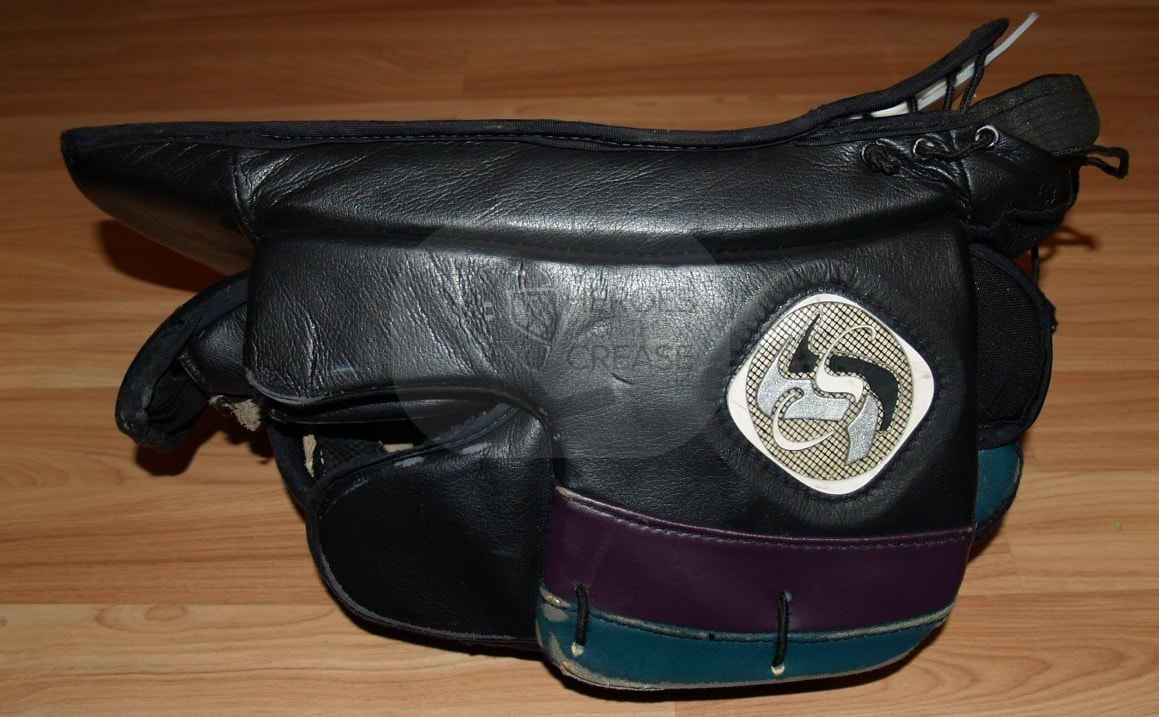 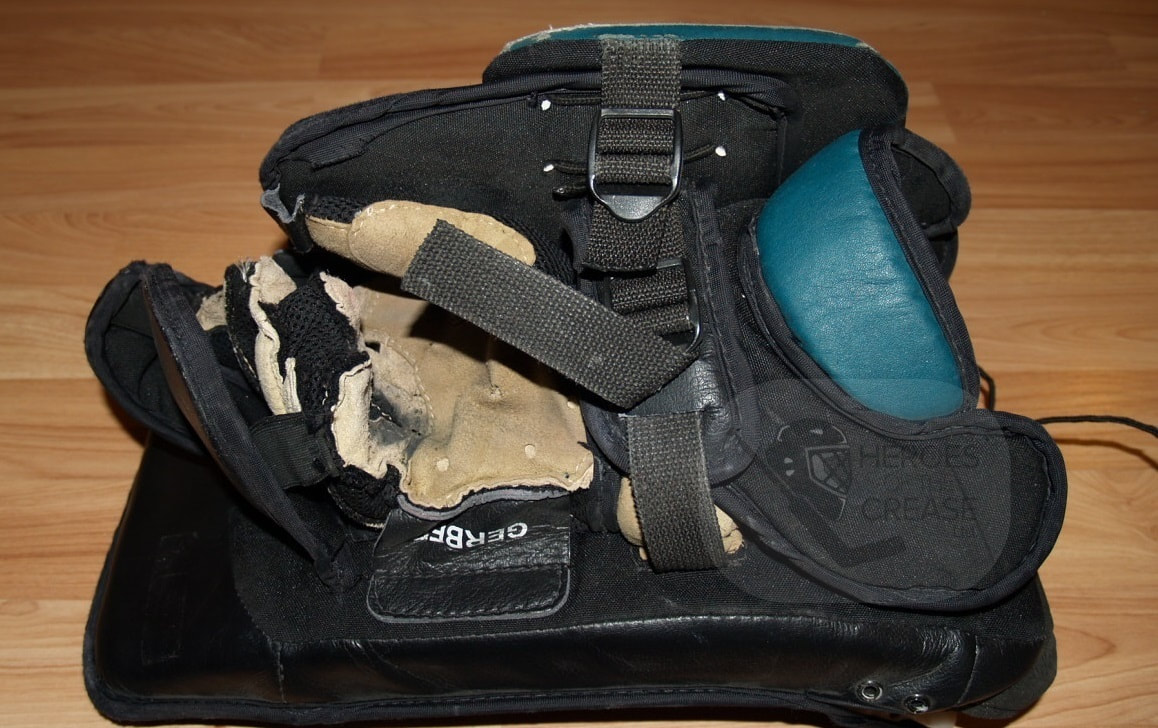 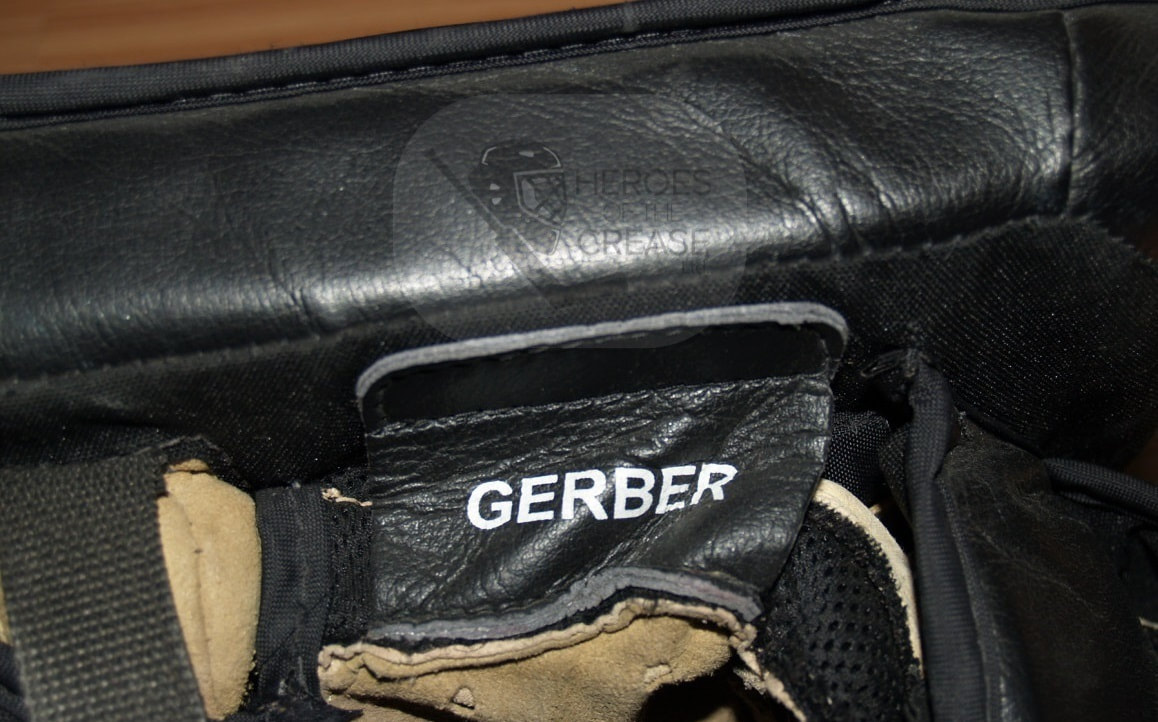 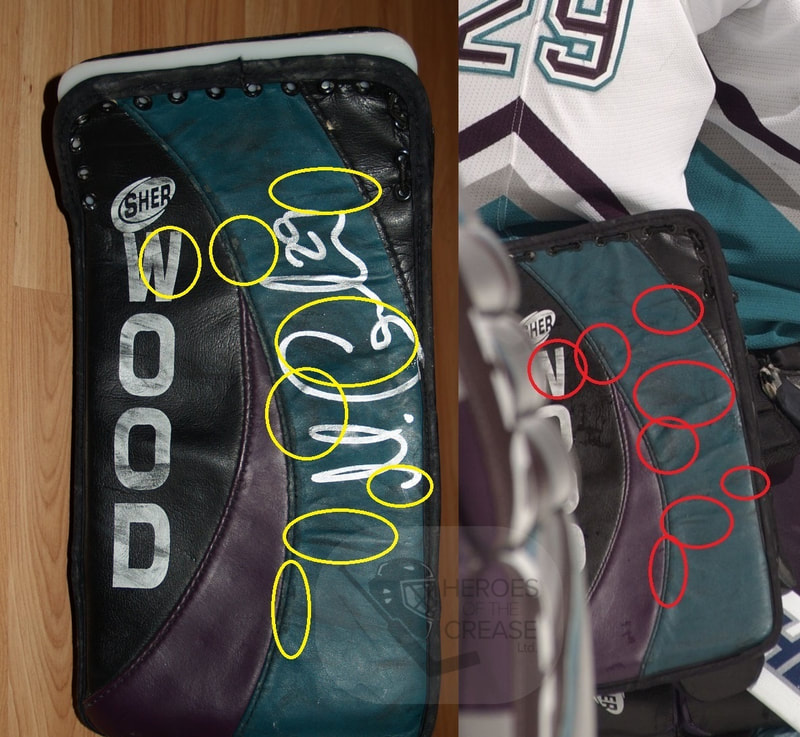